A man has lost his wife. His teenaged daughter and young son are all he has left and they must find a way to move on. But strange things start to happen in their house, unexplained things. They get worse. So after a while, he moves the family to an apartment building far away. Not long after they arrive, the unexplained occurences start again. So he calls in three parapsychologists to investigate. This is what Apartment 143 (or Emergo as known by its original title) is about.

Tape rolls while these paranormal experts take apart every room in the new dwelling, setting up equipment and cameras everywhere and carefully interviewing every family member. Sooner than the investigators can finish setting up, whatever is messing with them starts up and they begin to suspect that this will be a demanding case to solve. 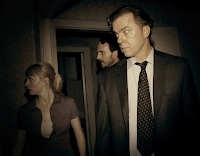 No, it’s not about an apartment at all. It’s about the people who live in it. As the investigators come upon terrifying discoveries, they begin to suspect that they haven’t been told the whole truth about what happened to poor old mommy. Was “Alan White” (Kai Lennox), the father, somehow responsible for her death? His daughter, “Caitlin” (Gia Montegna) hates dad’s guts and blames him for whatever happened. Maybe she knows more than she is telling, which explains why she has such a rotten attitude and everyone in the house (and everyone watching) wants to backhand her across the mouth. His four-year-old son, “Benny” (Damian Roman) is just scared by everything and doesn’t understand this whole mess.

You know who else doesn’t understand this whole mess? We don’t. It is supposed to be a “found footage” camcorder horror movie on league with Paranormal Activity. Writer Rodrigo Cortés is not new to filmmaking. He was the one who brought us Buried (2010), and here he is presenting us with this. It’s a step down for sure, but it’s not for a lack of having scary stuff happen. Of the few nerve-wracking scares we get from it, Apartment 143 will exercise the hair follicle muscles aplenty, even when we can clearly see what is coming. 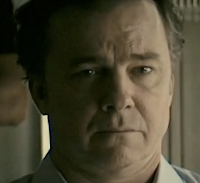 There is a lot of techno-talk on how the pieces of investigative equipment work to eliminate possible natural causes for the phenomenon. The rest is philoso-babble on how poltergeists might possibly come from subconscious “demons” in one’s inability to cope with tragedy. It was like it was a priority in the writing to suggest this to the audience. Everything that happens seems to deny this hypothesis, but it doesn’t really matter. The film struggles to tell its story.

In just a few subtle ways, it feels like 1963’s The Haunting where, amidst the terror, we got so much irrelevant commentary that we found ourselves starting to want to tune out. But here, some of that “too much talk” comes as just not-so-fine attempts at certain characters “de-stressing” or else trying to relate to each other.

Camcorder ghost movies are getting old über-fast. This one doesn’t help things by being less than what we expected, but at least there are no Catholic priests called in. These investigators are oddballs. They seem to not even be convinced that what they are witnessing is real paranormal activity, but the film isn’t consistent on this. The lead investigator (Michael O’Keefe) talks like a skeptic, but his colleagues seem to suggest that their track record in laying bear the truth and spotting “real” supernatural activity is solid. 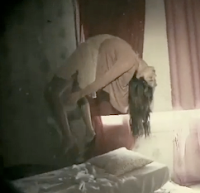 The delivery of lines feels scripted at times and the performances aren’t always natural enough to feel right (though they meet the bar when it’s time to turn up the emotional heat), but I didn’t care as much about that. What I wanted most was a story that really captured my interest and made me contemplate the terror and the reasons for it. I never got that.

It would have really been nice had the creators focused more on the characters in the story and their relationship to one another. I could have forgiven nearly all other shortcomings. We are given a number of suggestions, but never any unity between the indications as to the cause of the disturbances. The result is a movie that has a few riveting scares, but no idea of what it wants to accomplish—and then it finishes by indulging in horror clichés and “restless spirit” imagery. Blah!