Sacha Baron Cohen, the out-of-bounds comedic genius behind Ali G Indahouse (2002), Borat: Cultural Learnings of America for Make Benefit Glorious Nation of Kazakhstan (2006), and Brüno (2009) comes at us again in The Dictator and he hasn’t lost his game one bit. 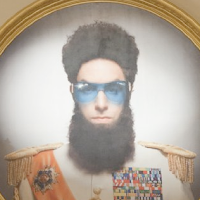 Cohen – the man of many talents, faces, and outfits – is freshly back before us as “General Aladeen” who goes to New York to a United Nations meeting to make his voice heard in speaking out against the evils of democracy coming to his North African Republic of Wadiya.

Aladeen embraces everything worth parodying in the construct of a selfish, angry, childish, misogynistic, and highly anti-Semitic dictator who rigs races and elections and sends those under him to their deaths on a whim. He has his country proudly working on the development of nuclear weapons while repudiating the idea of selling Wadiyan oil to outsiders.

When he arrives at the UN Headquarters in New York, he is betrayed by his uncle “Tamir” (Ben Kingsley) who has been leading the resistance against him. Aladeen is captured by outspoken hater/henchman/assassin/torturer “Clayton” (John C. Reilly). With his beard shaved, Aladeen escapes and fits into the crowds outside who are there to speak out against his war crimes. 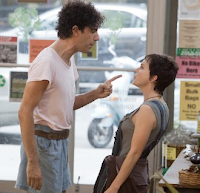 On the run, he meets far-left liberal activist “Zoey” (Anna Farris) – with whom he begins to develop feelings – as she puts him to work in her refugee-staffed hippie grocery store. He eventually comes into contact with “Nadal” (Jason Mantzoukas), his former head nuclear physicist he believed he had executed, who agrees to help him reclaim his power from his uncle’s resistance and imposter/poser “Efawadh” (also played by Cohen).

If there is one thing Cohen is a master at doing, it is crafting his comedy to broad brush-edly offend everyone rather than one single target audience. The Dictator does just that, as it takes subjects like ethnic cleansing and despotic rule and puts them on level with party gags and classic jokes. And in similar fashion, underhanded Western democracy and the war for foreign oil are also tacked up on the dartboard. 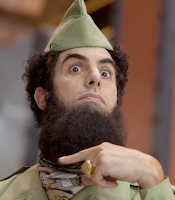 Cohen’s sometimes-tasteless stylings are not left behind anymore than they ever are with childbirth in a grocery store that involves using a vagina to hold a cell phone, and Zoey who begins to fall so in love with Aladeen that she agrees to shave her pits for him. Aladeen and his beautiful female bodyguards are, of course, part of the fun, but are a welcomed sidestep from the tastelessness.

The expected appeal of The Dictator is how far Cohen will go in being utterly outrageous. But by those standards, this may be considered a tamer work without the boundary-pressing shock value we got in Borat. We are left with sometimes-middleweight comedy that impresses us more because it is ruthlessly intelligent and shows us that even if it isn’t on league with Borat, it is still very close—and far above Cohen’s other works.

The Dictator makes the cut. It is not only clever, but also extremely funny in its time and place. It reminds us that Cohen doesn’t have to resort to rehashed antics or foolish and scatologically crude ploys to be superbly relevant in his culturally sensitive hilarity, although he chooses to give us all of that anyway.