Chernobyl Diaries is about six thrill seekers who go to Kiev and get in good with an on-edge tour guide who gets them into the ghost city of Prypiat, which is in close proximity to the infamous and abandoned Chernobyl, home to the great nuclear disaster of 1986 that claimed thousands of lives.

Their tour guide, “Uri” (Dimitri Diatchenko), a Russian ex-Special Forces operative, gets them past the blockade and into the restricted area and takes them some 12 miles inward to get the best camera shots against the backdrop of overgrown and debris-strung streets and once-thriving apartment buildings where the families of the workers lived. 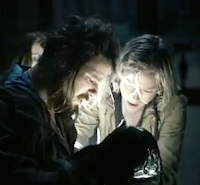 At this point, the roads are barely roads. A ferris wheel sits abandoned and rusting in the elements, yet another sad sight next to dead and deformed fish near the river Belarus where sick animals sometimes wander by to desperately scrounge for food. Radiation-ridden belongings are the clutter in the hallways of every building, more grim reminders of the dark side of technological progress.

They feel like they are the only ones there. It isn’t until they attempt to leave that the group realizes their vehicle has been intentionally disabled and that they are in fact not alone.

What Chernobyl Diaries is not about is “diaries” of any kind. The film doesn’t even use the “found footage” styling correctly. Or, at least it seems to and then departs from the model in showing footage that could not have been captured by anyone in their group. And unlike how it starts out, subtle “mood” music is eventually added for effect.

In more than a day’s time, the cameras (like the flashlights) still have power and no one ever seems to have any pressing needs to use the bathroom or get clean water (they brought none with them) while they are trapped inside a small van.

The cast, of course, has to be young, adventurous, semi-attractive or better, and in college or just out of college. The gang is all of that—all except likable.

“Paul” (Jonathan Sadowski), the crazy bad decision-maker in the group, springs the idea to go to Chernobyl instead of going to Moscow like they planned. He’s an “extreme tourist” at heart. His brother, “Chris” (Jesse McCartney) and his girlfriend, “Natalie” (Olivia Taylor Dudley), and Natalie’s best friend, “Amanda” (Devin Kelley) – together with a hipster-like Australian couple, “Michael” (Nathan Phillips) and “Zoe” (Ingrid Bolso Bernal) – are along for the ride. But who cares? No one cares for tourists.

Putting aside a well-choreographed and marvelously atmospheric setting, nothing in Chernobyl Diaries is scary. There is very little tension or suspense except at the smallest of intervals, and those are only brought about from the banging and screaming that can reach unnerving heights.

Even in the stills, you can see illumination is going to be a problem. The un-camera-friendly lighting makes it nearly impossible to make out what is happening when our dwindling-numbered gang seeks shelter in abandoned cars, basements, and in the corners of windowless buildings. We soon begin to want whatever is out there to finish these fuckers off so that we won’t have to watch anymore.

When we’ve been subjected to this for long enough and the ending finally arrives, our last hope for the film redeeming itself is blown to bits in a stupid and illogical ending. 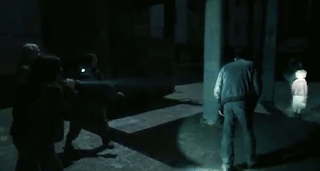 Oren Peli, the creator of Paranormal Activity, is known for being able to create sensationalized horror with a limited budget and unique premise, but this one doesn’t measure up. He was the driving force behind the project with first-time director Bradley Parker at the helm. But this soupy and unoriginal mixture of horror memes is only worth passing by. No wonder it wasn’t prescreened for critics.