The Hunger Games is about future North America where provinces referred to as Districts are under dictatorial rule of the leader of a nation called Panem. The setting is in the Appalachian region in what is now called District 12.

Due to an uprising in an earlier generation, a 13th district was eliminated from the nation, leaving the remaining 12 districts only. As a generational form of penance, the districts are forced to take part in a yearly Hunger Games competition in which one man and one woman are selected from each District to fight to the death against the other selectees over a 4-day period while the nation watches. 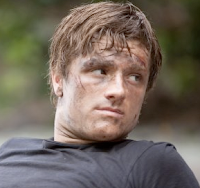 This brutal custom is to serve as a reminder against any discontents who might consider rising up against them, but it also is supposed to give hope and serve as a history lesson with the end product being loyalty.

We meet “Katniss Eberdine” (Jennifer Lawrence) going out to hunt in her poverty-stricken coal-mining town just before “the reaping” is called. The Reaping is the yearly gathering in which the Hunger Games gets its contestants. When the drawing is held and Katniss’ young sister, “Primrose Eberdine” (Willow Shields) is selected, she volunteers as a contestant along with a selected male, “Peeta Mellark” (Josh Hutcherson).

As preparation for the games gets under way with the help of their mentor and past game winner, “Haymitch Abernathy” (Woody Harrelson), the two aspiring champions must not only capture the attention of a national audience, but their own feelings for each other while coming to grips with the fact that the odds of survival are not good. Only one can take home the prize.

The Hunger Games provides interesting viewing. Indeed, it cannot fail to do so with its being based on the best-selling book by Suzanne Collins, but its ill-placed-ness on camera becomes very apparent. By all accounts, the movie is a faithful adaptation of the novel series, a trilogy followed by two additional books, and this is why the film employs the exaggerated details that it does. 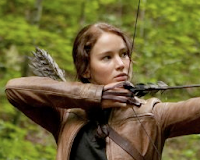 In a retrofitted future America, we have the look of early 1900s combined with an inner city of contrastingly futuristic technology, like railways and reflective buildings. Remember those brief glimpses of courtrooms after World War Three as portrayed in Star Trek The Next Generation? If you don’t, just know that the outfits are colorful, like weirdly out-of-place props from some fairy tale or a bad dream. The haircuts are goofy, as are most of the styles, but the effect still rings out; we feel like it’s a different time, with chrome, rock-shaped aircrafts and strange metal buildings, some of which still look like manufactured props. And everyone knows that the future just can’t have plain-clothes stars as villains! They have to be dressed up and have odd facial hairstyles to fit the outfits!

Things get off to a good enough start, and then as the plot develops and works its way through the eventual stagnation in the name of teen romance, we get the impression this had to be coming from source material made strictly for kids (in case we didn't know already). And so it was. We are supposed to take home that this cruelly-run society has become brutally indifferent to the meaning of life and liberty. We certainly do get that, but with a plot that does only a halfway decent job at making us overlook its great many oddities.

Quite often, whatever drama is going on is halted and we are given shots of the on-looking cameras. These cameras are everywhere they are supposed to be at just the right moments. So when we see the overdone “I have feelings for you” drama, we are reminded that everyone else sees it, too.

And rather than spend time with dynamic dialog, the villains just repeat: “may the odds be ever in your favor” in a nicely creepy way and go off and do villain-y things. There are nearly no references to things on earth that we can relate to. And in the spirit of attacking human cruelty and humanitarian issues, they threw in swords and bows and arrows on the competition field because, well, because it’s just cooler than guns and people get to grit their teeth and clank swords doing so.

The fight scenes are piss-poor. The racial aggression – and sometimes out-right racist themes like form-fitting expendable blacks and a small black girl whose only skill is climbing trees real fast – are purposely done, so as to make the movie play on civil rights awareness issues to inflame the audience (while taking total advantage of them in an egregiously hypocritical and clichéd way). And even this doesn’t work as expected.

We never feel for the lot of them as much as we’re supposed to. However, the film is carried with bull’s-eye performances from its leads. Hutcherson does a stellar job, and from Lawrence we could not have expected a more invested performance. There are even old pros like Donald Sutherland who can be cool as ever in the same type of “corrupt, high-up official” role he’s had since way back when. None of this changes the fact that the film is highly overrated.

There is really no climactic ease to this film. It gradually evolves its story, running with the drama (at first) beautifully. There are some plot-holes that seem rather odd in a story about people fighting to survive. For instance, there is a scene where Katniss is chased up a tree. What should have been her end is ruined by the fact that these hunters don’t even know how to sleep in shifts, allowing her to eventually outsmart them.

It may become memorable because of the story on which it is based, but this teasing, labored romance in a climactically challenged layout with writing like a low-budgeter becomes more difficult to stay interested in the longer we watch. The ending gives us too much of what we want while failing to say what it needed to say as effectively as it should have.