When free spirit “Jules” (Anna “Go Girls” Hutchison) tells her best friend “Dana” (Kristen “Revolutionary Road” Connolly) what a good time they’ll be having at a cabin in the remote woods, you automatically know and are glad that she has no idea at all what awaits her or her friends, and neither does Jules’ jock boyfriend “Curt” (Chris “Thor” Hemsworth). The same is true of their intellectual friend with his notably piercing gaze, “Holden” (Jesse “Grey’s Anatomy” Williams) and their stoner friend “Marty” (Franz “The Village” Kranz) who seems to have a better grasp of reality, despite himself. Takes all kinds. 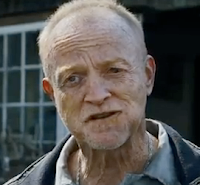 After taking off in the RV up the mountain, they stop for gas and run into a weirdly cryptic and confrontational gas station attendant (Tim De Zarn). When they’re back on the road after a near-fight, it isn’t long before they arrive and forget all about it. Following horror movie suit in letting out their whoas about how cool the place is and how much fun they will have losing their inhibitions, it is then that we begin to get to know our five lambs for the slaughter as they begin to know the creepy place they are staying in.

The Cabin in the Woods is about much more than any old cabin in the woods where unsuspecting, sex-having young adults find themselves headed for a very bloody end. The reason for this trip in their minds involves nothing more sophisticated than booz and weed, but on the other side of things, this ill-fated five has an important destiny they are supposed to fulfill. They must die for a grim and grueling purpose, one that extends far beyond those who seem to so callously want them dead.

And the film opens with those who want them dead casually chatting and making office jokes while placing bets on who bites it first while otherwise preparing to make sure everything at the cabin goes as planned. We won’t be able to relate to them until the very end of the movie, but everyone in this film has a reason to be hopelessly depressed.


And then we get big red letters that flash across the screen as though we are watching some humdrum Halloween movie. The film has this ability to quickly alternate between cheap and classy, between what we expect to see and what we couldn’t see coming. And as it is an example of a very extreme type of parody, this is for sure one of those films that will go over better with critics than audiences in general simply because it dares to call out the stupidity of the masses.

And it’s worth reminding my readers that it takes some steady directing if you are going to marry horror and humor in the same movie and be true to each genre. This one takes the taco, but part of what we are never ready for is how much we start to care about these lambs headed for the slaughter when we find their IQs turned up and get to see sides of them that suddenly make it a tad harder to root against them—especially when we get no answers as to why this is happening and we have to wait until the end of the movie to make sense of anything.

The Cabin in the Woods may not be your traditional carnival ride of carnage (though there is plenty of that, and sometimes too much), but it will indignantly and horrifyingly keep you interested. And in fact, its mainstay is about being just the opposite of what comes from the abandoned mines of bad ideas that we are getting today when we aren’t being bombarded with soulless remakes of earlier horror greats. 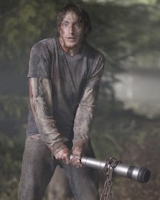 The average moviegoer may or may not have plans to add this to their DVD or BluRay collection upon leaving the theater, but it’s not often that a horror movie comes along and turns cheap gore into a uniquely funny and horrifying theme like this. And this is how we describe a movie that so thorough slams the grindhouse gunk and mindlessness of “kill the kids having sex” and makes us ask: Why the hell do we like throwaway carnage anyway? When did we start choosing to watch cardboard-cutout people die as opposed to a story that gets under our skin and makes us feel the despair of contemplating the utter misfortune of its stars?

There is a celebrity appearance at the end, and if you’ve seen Paul (2011), you’ll know who it is. This would have had more affect if this were the first time we’d seen that, but The Cabin in the Woods is never really out of ideas or surprises, big or small. And while we keep waiting for Hemsworth to turn into Thor and trash these ghoulish attackers, we are given no such luxury, just a story that stays confined to the shallow-mindedness that made this wildcard of a movie possible in the first place. 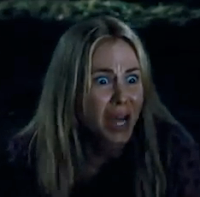 And it may even be a little too much of what is not expected – and may even be hypocritical in what it tries to do by using a parade of orchestrated slaughter to tell us how stupid we are for liking said things – but it will take a seat and sit with arms crossed all the way to its absurdly logical end. And you’ve got to applaud a movie that finds no stopping-place short if its necessary conclusion (audience hopes be damned).

Thank you, Goddard and Whedon, for taking back the horror trophy and setting it up proudly in the camp of those with brains.