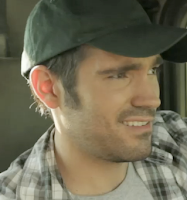 Bite Marks is a horror-comedy about a gay couple, “Cary” (Windham Beachman) and “Vogel” (David Alanson) who take a trip on foot across the country in hopes of patching up their broken relationship. It is at this point that the two run across “Brewster” (Benjamin Lutz), a nice guy who gives them a lift for reasons that even he is not comfortable admitting.

When Brewster's brother, “Walsh” (Stephen Geoffreys) fails to take off for the trip as planned, Brewster is called in to ensure that an 18-wheeler delivery carrying coffins makes it to its destination on time. With the three finally on board and heading out, a breakdown lands them in a junkyard where they soon discover what exactly has been making so much noise inside those coffins. It happens to be hungry for blood. 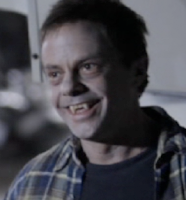 As a gay-based vampire horror-comedy, Bite Marks just about succeeds. But like so many low-budget movies, the main challenge is being able to afford enough re-shoots to get the delivery of lines right, which this film very often doesn't do. It is the beginning that is so much rougher to endure than the middle or ending portions when it comes to dialog. In fact, the script is a glistening sea of off-timed jokes and improperly primed verbiage, which can make things really difficult to look past at first.

And we're not holding down this rather inglorious production (which could well have been titled “Brokeback 18-Wheeler”), but if you can't get the performances right, you've got a whole lot of nothing. Without prior knowledge of what the film hopes to accomplish, you have no idea it is supposed to be a comedy until you reach a certain point. It is then that the next milestone becomes figuring out that this movie only borders on being as funny as it hoped to be. But despite another effort, the film is in no sense scary at all.

Defying all of its weaknesses is the fact that there is a real story here and it wants to be told. It involves writing that someone put a lot of hard work into with good vision behind it. When it ends, we understand and sympathize with what it tried to do and we almost feel the better for having watched it. It augments any gay comedy expectations in its own peculiar way, but does not self-satirize. The chemistry of Alanson and Beachman is close to undeniable and the character development is approaching excellent with Lutz blending into the mix nicely.

Even the opening credits are an artistic nod to what it hopes to accomplish, followed by great choreography and some well-selected filming sites. By way of gore, it uses its low budget surprisingly well. Comedy-horror fans might just be impressed here, although it is sad that it falls short of its true potential.