Wound is about a woman named “Susan” (Kate O’Rourke) who shows us her true nature when a man comes over to see her at the film’s opening. You know this Susan is going to be a different kind of gal when she clubs him unconscious, ties him up, strangles him, whips out his pecker, and cuts it off before burying him in the backyard. 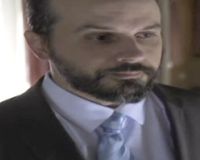 Actually, Wound is about much more than a psychopath named Susan. It’s about incest, rape, the loss of a child, mental illness reaching lethal levels, and served-up-cold revenge. The guy who brought us Death Warmed Over (1984) and My Grandpa is a Vampire (1992) brings us Wound.

Wound is one of the most disturbing films I think I’ve seen, and it doesn’t do badly on its gore even considering the limited budget. Odds are, you won’t be terribly hungry after watching.

Susan cannot accept that at the young age of 14 she had a stillborn because the girl (Te Kaea Beri) has somehow grown up and still follows her around and (even more curiously) wants to kill her. And it shouldn’t surprise you that a deeply troubled Susan has mother issues, too (as if everything else were not enough).

So it comes as no surprise that Wound is a deviant’s film, so dark and so deranged, and yet so mashed down in the gutter of incoherent surrealism that it will have serious trouble finding its audience even among those who hold up their perversity like a piñata at a party. Like its main character, the film just cannot come to grips with reality long enough to allow us to fully appreciate it. This is unfortunate because of the beautifully decrepit potential it had.

But O’Rourke is the true powerhouse behind this project, not just because she appears naked for us numerous times, but because she gives a performance that we wouldn’t begin to expect in a film of this budget.

The choreography is nothing spectacular and the volume level varies at peculiar times. Some of the build-up leading to poignant moments of drama isn’t always sufficient. Long-running surreal scenes that seem intent on challenging our levels of tolerance time and again threaten to ruin the whole project (and for most viewers, they do). But there will be those of us who get the highlights while being able to appreciate the level of “you decide” left for audiences.