The Summer of Massacre is an independent horror film that unabashedly aims to be the world record-holder for most on-screen kills in a movie (claiming 155, respectively). This hellish use of tape is the product of the unholy union of editor Steven Escobar and Cult Movies Magazine editor “Schroeder,” under the direction of special effects guru Joe Castro, the guy who brought us Legend of the Chupacabra (2000) and Terror Toons (2002).

After a brief opening, the film is divided into four sub-stories or chapters that give us the carnage from different perspectives and characters. These chapters are...

This makes it practically impossible to give a synopsis, so I’ll leave it at “all sorts of people die violently in this movie.” There, there’s your synopsis. Oh, and if you need more, just ask yourself if you want more since two of the sub-stories in the movie involve a well-groomed white guy beaten and robbed by other well-groomed white guys somehow turning him into a rampaging zombie and two persecuted homosexual firefighters who spend their undead years burning campers alive. So this is not stuff you want to know about, much less see. 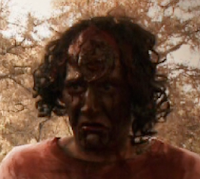 Problem is, even for a thousand-mile-an-hour murder marathon, these deaths mean nothing without some kind of story to make them make sense. But make sense this film can and does NOT. An OD’d hippie’s acid trip makes much more sense than this distortion of Hollywood Halloween icons for demented people.

I’m not joking when I say this film was an all-out assault on my senses, and possibly on the concept of creativity itself. I fought the urge multiple times to turn it off (really bad urges). Damn the review! Few movies have managed to be so loathsome, so un-relatable, so unlikable, so distasteful, and so pointless in such hideous train-wreck fashion that they leave the viewer with this much of an overwhelming feeling of time wasted. It hits every bad mark and none of the good ones. Most of the special effects are lazy, blotch-over jobs of color and graphics, which, in addition to not looking credible, give the movie the feel of being a commercial for an energy drink, pitched to sleep-deprived college students and workaholics.

What we have here is a pristine example of why not everyone with an idea to make a movie should make a movie. This convolution of language and imagery has no plot, but not only that, there is not one credibly salvageable idea in the whole badly acted, stinking mess.

After watching it, I felt like I’d been kidnapped and taken to a filthy hospital in Columbia, beaten over the head with a nightstick by a corrupt cop, and left facedown and half-conscious over a patient’s bed pan. I’m not being colorful or cute when I say watching this was one of the cinematically worst experiences of my life.