Sam Worthington is our star in Man on a Ledge—a less-than-successful thriller about, well, a man on a ledge. But with a title like that, you want – no, you demand – to get more from your movie than this. Calling a spade a spade, Man on a Ledge is darn near a plummeting failure.

Worthington plays “Nick Cassidy,” a disgraced cop who has served two years in prison for stealing a forty-million-dollar diamond from a top-grossing New York real estate kingpin, “David Englander” (Ed Harris). Released from prison briefly to attend his father's funeral, Cassidy finds an opportunity to escape in efforts to prove his innocence to the world.

The trailers make it look so good (and the movie had all the potential to be). Where it went wrong was...well, let's just ask: Where didn't it go wrong? It has some moments where it truly makes good on its quest to provide nerve-racking suspense with cliffhangers that hit at the right moments to make us feel downright lightheaded.

You keep watching, despite uncommitted acting on the part of everyone and cheesy, hokey characters that would have come off with more credibility had they been introduced to us as guest improvers on an episode of Whose Line is it Anyway?

When not soaked in substandard-ness, we have characters that lack any real development. Elizabeth Banks is “Lydia Mercer,” a disgraced negotiator who made the news a month earlier for failing to talk down a suicidal cop. She's supposed to be a borderline alcoholic who no other cops want to work with, but she's really just nothing. No distinctive qualities at all. 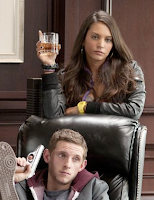 The same is true of Cassidy's ex-partner, “Mike Ackerman” (Anthony Mackie) or the SWAT team leader, “Dante Marcus” (Titus Welliver) who is constantly trying to take Mercer off the case when she begins to buy into Cassidy's conspiracy theory that he has somehow been set up by Englander.

Everyone here is either a weak portrayal of what movies have long tried to make cops look like, or else just weak. Nick's brother, “Joey Cassidy” (Jamie Bell), has a hottie (Genesis Rodriguez) who shows a lot of skin. What movie would be complete without a busty Latina to help fuel the spousal comic relief?

The ego-ish run-downs of dialog can be somewhat patronizing when they aren't pointless. We are supposed to keep waiting for Cassidy to jump, but we already know from the trailers that there's more to the story. The way things come together, we wish there were less because the plot itself is hinged with disbelief-inducing devices that start to make us feel taken advantage of. By the film’s end, all doubt has been removed.

So many things in this movie could or would not happen this way. We'd like to say that the suspense makes us take our minds off of this realization for long enough to enjoy it, but that would only be true to a very small extent. The movie is like a cross between the Die Hards and The Negotiator (1998), but it's nowhere close to as good.