In The Grey, Liam Neeson is “John Ottman,” a hired wolf hunter in northern Alaska put in place to protect workers in the oil fields. Having lost his girlfriend and living each day with thoughts of ending it all, he figures he might as well keep on doing what he does because he has no goals or plans for a future.

When he and co-workers begin the flight back to Anchorage, a plane crash kills/strands them in the wild in the dead of winter. Those few who survive are catapulted into a situation worse than death. They face not just injuries and the unforgiving cold, but each other’s fraying nerves and hunger. But the biggest threat proves to be another manifestation of nature: wolves. Yes, wolves. No, I didn’t believe it, either.

And it isn’t often that a movie comes along and puts something like wolves as the major obstacle for a band of adults to overcome, but this film does so without apology.

By trying to drag us quickly into a looming emotional heaviness, a good half of audiences will find that they aren’t ready for it. Right from the start, we suspect that our feelings are being manipulated (because they are). In the framework of a simple and direct survival thriller, this continues as we keep getting dramatic back-stories and flashbacks that don’t really give the plot much more momentum than it would have had without them.

Unlike its frostbitten and lost characters, The Grey keeps moving and isn’t hard to follow. It knows where it is and where it wants to go whereas our fortune-abandoned 7 are left to make their way without a clue. The viewer wants to keep watching because of a strong opening, but the best opening will not patch up the gaping holes in this life raft of a movie.

Once it becomes obvious that the film stretches the limits of believability with such impunity, we in the audience likewise start to lose hope.

The manufactured “tough guy” lines and thrown-around profanity are supposed to make things feel more on-edge, but they only tarnish the project. The dialog is nearing terrible and the heart-to-hearts between these former strangers when not locked in deadly wolf encounters start to feel soppy. The film's attempt at incorporating poetry into the story is rather limp. 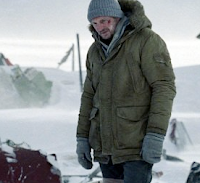 Worse yet, the behavior of this crash-landed crew is contrary to how people would react in such a crisis. When tragedy strikes, one of the most amazing things about human animals is their ability to put aside differences and unite to survive, but that’s not so true here. They don’t unite, they divide, and often when there is no call to do so. The fights and verbal altercations in an effort to see “whose is longer” leave us asking ourselves if we can believe people would behave like this.

We follow these guys as they keep traveling, hoping someone will spot them, but they make some questionable decisions along the way. Among these are traveling at night while being stalked by vicious wolves determined to eat them. You’d swear you were watching a supernatural horror because wolves don’t act this way.

Why keep moving? Because they must “keep moving.” No real explanation given. Now I’m no survival guide, but I say stay by what is left of the plane and light a fire. That way, help can find you quicker.

These wolves are something else. They go out of their way to kill people – not eat them – just kill them. They attack in broad daylight and have such good luck leaping out and grabbing humans around a campfire that you don’t know if you can believe any of it. 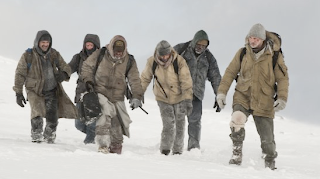 The way the budget was put to use does not give the film a nice finish, which we would totally overlook if we had better plot construction, but we are seldom moved by anyone enough to feel like our time watching is worth it.

There is a scene in which Neeson coaches a man as he’s about to die: “You’re going to die. That’s what’s happening”—very well done and unexpected. And I will further commend the film for the way it ends. Neeson has a great screen presence. I really wanted to like this, but what we have to live with is a movie with no surprises and little reward for finishing it out.

Well, here’s a surprise; there is not one bear or any other animal in sight for the whole film. Odd...but then, this entire film is, of all things, odd.