El monstro del mar! is about three young ladies – later four – who recklessly go about to have fun and end up going for a swim in a remote Australian body of water. “Blondie” (Karli Madden), “Snowball” (Kate Watts), and “Beretta” (Nelli Scarlet) are bad girls who spend their lives doing what they want with no sense of purpose beyond drugs and alcohol—in other words, they are like almost all college girls, but with an added willingness to glide a razor blade across a man's throat and watch him bleed out with contempt for his convulsing, reddened body. 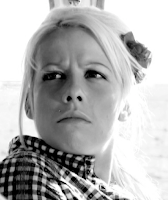 When the girls arrive at the water, their good times are interrupted by a crippled old man in a wheelchair (Norman Yemm) who demands that they get out of the water at once. But do they listen? Not a chance. Their calloused indifference to good sense awakens a ravenous sea beast that once again goes on a killing spree.

Once again, I say? Yes, once again. Having spent years trying to keep his young granddaughter, “Hannah” (Kyrie Capri) out of the know about what really happened to her parents and to keep her away from the water, when she meets these three bad influences, the old man will find her making some defiant judgment calls of her own.

But as dangerous as this sea monster is, it is the beast that has no idea of who it's messing with. What seems from the start to be a pathetic addition to grindhouse gore with deficient acting, guided only by the appeal of scantily clad girls, grows into a surprisingly watchable piece from writer/director Stuart Simpson who brings us a filthy-but-distinguished work of art that we find ourselves wanting more and more to like. 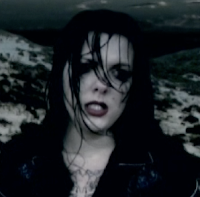 Scene-cuts at the wrong places are done for dramatic effect, and they work more often than not. Despite an obviously low budget and hit-or-miss acting with script executions that don't always work (and gore/action sequences that range from overdone to outright laughable), we are still brought back to the conclusion that the film works.

With sleaze-appeal in constant overdrive, one of the things that works is the film's portrayal of bad girls and how we will let them act as their own parodies of what is wrong with the wayward girls we've come to know in our horrors and thrillers. 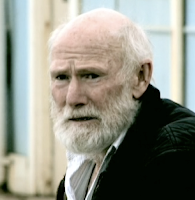 The character of crippled old “Joseph” is limited to little more than grunting in front of the camera with lines not too much more substantial than: “Damned whores!” But he is never intended to be in focus for long. This movie is about the girls, and you've seldom seen such an unsophisticated attempt at making bad girls good.

I'll go so far as to say that El monstro del mar! is what Sucker Punch wished it could have been. This film does darn well what it sets out to do, rarely falling back to rely on grunge humor the way we'd expect it to, which is why we forgive its occasional splurges into cheese-dom. It is a worthy tribute to Jaws, Godzilla, Thelma and Louise, and so many shameful Japanese Sea Monster movies (and really any movie with hot girls kicking butt and taking names).

It takes some work to accept that in trying to portray “proud, hot, and deadly” with such a limited budget and just a huge desire to make a movie that it, in this case, worked! I feel immoral for wanting to root for it, but root for it I did—and do.

There will only be two schools of opinions with regard to this film; 1) “Who the fuck are they kidding?” and 2) “Oh, the girls!” If you can jump on the bandwagon of appreciating the latter, then way to go. If not, then, well, I'm sorry for the experience.

The bottom line: This piece of exploitation is done well, and with both vision and heart. Despite its grime, you have to give a nod of respect for that. And maybe Australia will prove to have a consistent knack for augmenting our noir-ish perceptions of young girls who dance on old cars.