Directed by Asghar Sarhadi, A Separation is about an Iranian husband and wife seeking a divorce because the husband, “Nader” (Peyman Moaadi) wants to stay in Iran to care for his aged father (Ali-Asghar Shahbazi) who has succumbed to Alzheimer’s Disease while wife
“Simin” (Leila Hatami) wants to move to give their daughter, “Termeh” (Sarina Farhadi) a life in a better place. 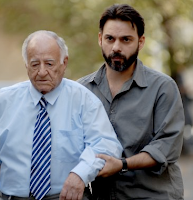 When they cannot reconcile, they face divorce in the courts. As Simin is preparing to leave, trapping their daughter in the middle of the controversy, Nader works while hiring care for his father at home. When one of the caregivers is hurt in a scuffle with Nader, a legal battle begins that takes us through the rest of the movie.

The subtitles may not always be spelled out correctly, and as fast as they appear on screen, are hard to read for the first 1/3 of the film, but that is about as far as criticisms go. This isn't even an American film, but it is a must-see, a once-a-year, stand-alone presentation that comes along and makes you ask: “How long has it been since I’ve seen a movie this good?” 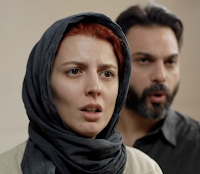 In this hallowed production, Hollywood has no say. There are no cluttered or manipulative musical ploys, no clichés relied upon or cheap plot devices to solicit interest. There are no peaks or valleys of trump-card revelations revolving around huge events, just two families battling it out in an ongoing effort to right a wrong. The plot swings with a single decision or declaration on the part of any given character, and suddenly, your perception of events changes.

The story itself – told with an uncanny brilliance – is what walks us through the lives of two families bound in a mutual struggle. While leaving the viewer to stew in a close-to home drama, we are led down a winding road of accusations, guilt, accountability, and ethics—all the while being reminded of the surprising capacity of human nature for good and bad.