Movie Review: The Girl with the Dragon Tattoo (2011)

The Girl with the Dragon Tattoo comes to us as the first of a Swedish novel series, but before that, it came from the gutter of one man’s regret.

Late creator Stieg Larsson shared that having once witnessed the rape of a young girl named Lisbeth, his lifelong regret has been not trying to stop it. The result of that regret has culminated in a three-part novel series called Millennium and a number of movies based on it
(and now a second movie sharing the same English title). 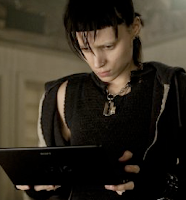 The Swedish film (2009), with English subtitles later added, got as much attention as it hoped to, but apparently not enough. When director David Fincher signed onto this project, he jumped on an even more successful attempt at capturing the hearts of American audiences.

The alluded-to rape victim’s name was “Lisbeth” and she served as the inspiration for the film’s main character, “Lisbeth Salander” (Rooney Mara). The character is a rape victim, committed as a ward of the state at the young age of twelve. With a troubled past but altogether amazing abilities as a computer hacker, she is eventually picked up by an investigating firm called Milton Security. The assignment we come to know her on is the investigation of “Mikael Blomkvist” (Daniel Craig), a Swedish political magazine editor who loses a libel case concerning allegations about a billionaire industrialist named “Hans-Erik Wennerström” (Ulf Friberg).

After his sentencing, Mikael is approached by “Henrik Vanger” (Christopher Plummer), the retired CEO of the Vanger Corporation and is offered a job: to find out what happened to Vanger’s niece, Harriet, who disappeared and has been assumed dead since the 1960s. Looking back some forty years, the task seems almost impossible. Reluctantly accepting it, we come to find Lisbeth and Mikael working together to utilize their combined skills to find the girl. 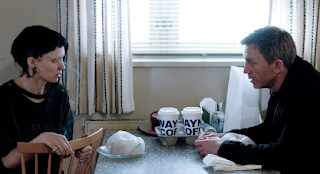 The Girl with the Dragon Tattoo is a ride of intrigue, immediately engrafting, and at every step appealing. The story is as solid as a speeding bullet in the form of a dedicated and dark mystery with retrofitted crime-drama appeal and a hearty respect for its roots as a novel with events taking place in relatively unpopular Swedish towns.

Fast-moving (and only funny for brief moments when it wants to be), the film is a gradually deepening mystery, one that sometimes works to the viewer’s dismay. It is incredible that in all of its nearly laborious three-hour runtime, the viewer’s level of interest only manages to wane a little throughout the thickening of the story where a noticeable lag in pace does become noticeable. 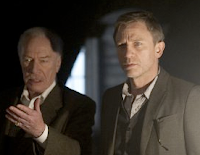 Attention spans do drop a bit more once we approach the film’s midsection, and thereafter, we see redemption for shorter and longer stretches of time throughout. The flick does takes its liberties when it moves from “troubled girl doing what she has to in order to survive” to computer hacking and espionage girl. However, these liberties in the name of entertainment don’t hurt things too badly.

While reveling in sopping amounts of sadism, sensuality, and sexy silhouettes, such focus happens to be at the very heart of why the story was crafted. In all of Larsson’s works in the series, we have on display a very negative view of human nature. Cynicism involving matters of trust and emotional distance in friendships and vengeful hatred for violence against women are what this is really about. And finally, there is the thematic question of the role of society in volatile upbringings and who shares most of the blame for broken lives.

Fincher’s all-out approach to staying with the source material works to overload our senses. The enthrallment is commendable. But rather than that being a compliment, this can be viewed as a negative since a second or third viewing may be in order to fully understand what has been watched. But this is one film that is for sure worth watching again.

Some of the more congested story elements could have been broken down into more chewable bites, but it still never fails to fascinate in any regard. We have top-shelf performances from Craig and Mara, but we shouldn’t forget to recognize Plummer who returns to the screen in a none-too-shabby performance as an obsessed and retired business tycoon looking for closure.

This is truly a sensational film that deserves its accolades—one of the better films of 2011.