Lock Them in a Cage and Drown Them

January 04, 2012
Movie Review: Alvin and the Chipmunks: Chipwrecked (2011)
Summary: Playing around while aboard a cruise ship, the Chipmunks and Chipettes accidentally go overboard and end up marooned on an island.
Spoilers: none 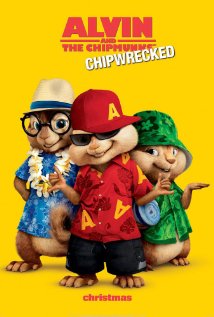 This third addition to the Alvin and the Chipmunks movie series ends on what most will consider a very low note.

To quote the critic’s consensus on Rotten Tomatoes: “Lazy, rote, and grating, Chipwrecked is lowest-common-denominator family entertainment that is strictly for the very, very, very young at heart.” Couldn’t have put it better myself.

We have over an hour of
helium-sounding voices, pop culture references, brief parodies of famous films, and regurgitated songs—all of them sung in short excerpts like only these little annoying creatures can do. I can’t help but wonder how they’d sound at the bottom of an ocean in a cage weighed down by an anchor.

Expectedly, the film is a reckless disregard for anything mature, but even the immature may not be able to stay the course for long.

“Dave” (Jason Lee) and the Chipmunks and Chipettes go on a cruise vacation. When the quest for endless fun ends with the chipmunks in hot water with the ship’s captain and an out-of-control kite-flying stunt takes things over the edge further (literally over the edge of the ship), they find themselves marooned on an apparently deserted island.

With the chipmunks, Dave, and “Ian” (David Cross) together lost on a remote island, the gang must find their way back (back to the ship and back in Dave’s good graces). One thing that will not be in your good graces for long is this movie, not when you’ve had to sit through it for more than five minutes.

Through this onslaught of song snippets, snooty-girl dance-offs, and some very uncommitted performances from its cast, this Chipmunks movie is over-exposure to school-kid stupidity that most young kids won’t even like. 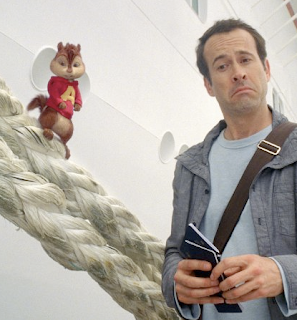 The occasional parody of the stuff we see in action movies could have been a nicely exploitable angle, but with stop-and-go hip-hop sing-alongs that can nearly be called torture, I don’t need to tell you it isn’t worth it. If you disagree, then perhaps you’re ready to affirm that it is the case that children, like most animals, have some strange and inexplicable love for high-pitch treble melodies (because there’s nothing else here except for that and a perfect G rating).

On the island, the chipmunks meet “Zoe” (Jenny Slate), a girl supposedly stranded there for at least the last eight years. From here, we get a very focused parody of Castaway (2000) that at first offered a glimmer of hope, but it came with a performance that has the effect of making those of the others look respectable. Not good. Maybe “insulting” is the word I am looking for.

There is a story underneath this shabby jungle adventure. It’s just not even remotely interesting and does nothing at all to get or keep audiences invested. This “Threequel” was worse than “The Squeakquel” before it.