December 20, 2011
Movie Review: Arthur Christmas (2011)
Summary: On Christmas night at the North Pole, Santa’s youngest son looks to use his father’s high-tech operation for an urgent mission.
Spoilers: none

Parents may or may not want to bother taking their kids to see Arthur Christmas, an animated film directed by Sarah Smith about Santa and the Elves and what happens at the North Pole when so much as one child is missed in the delivery of Christmas presents.

Despite what the title may suggest, this film has nothing whatever to do with the Arthur
children’s series by Marc Brown on PBS and Cartoon Network. This film focuses on efforts made by “Santa” (Jim Broadbent, voice), Santa’s son “Steve” (Hugh Laurie, voice), and Steve’s brother “Arthur” (James McAvoy) who go all out to ensure that no child is left behind for Christmas. Behind the scenes is retired “Grand Santa” (Bill Nighy) who, at 136 years old, is still ready for a sleigh ride.

Evidently, because we walk around with phones stuck in our ears these days, some think it’s time for Christmas movies to change from what they used to be, which is perhaps why they have Santa and team getting toys to kids in a spaceship rather than a sleigh and using PDAs, smartphones, and advanced cloaking devices to stay off the (literal) radar. 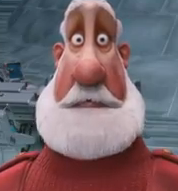 If Mission Impossible-style Christmas movies are the future of holiday entertainment, far be it from old me to stand in their way, although it has yet to be seen how well the masses will identify with the film’s extravagant efforts to revamp Christmas.

The CGI performances are as good as anything a real-life actor could do, and the presentation is drop-dead adorable, but it won’t engage younger kids as well as it should, which is a downright disappointment since the film misses much of its audience. Compare this film to Santa and the Three Bears (1970) and you’ll see an exact contrast. Kids will watch the latter all the way through. Arthur Christmas doesn’t bring the innocence of Christmas and it lacks most of the appeal. 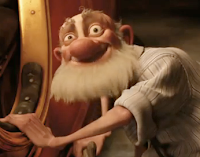 The film holds a PG rating for some suggestive and sometimes crude humor, some of which is obnoxious. When we do get more than halfway in, it is only then that the characters grow on us enough to be at least somewhat memorable and likable. With this, the work loses the majority of points, and for not distinguishing itself from the competition in a market now bursting-at-the-seams full of finely animated kids movies and their characters with distinct features and crisply accented voices.

Yes, it will tug at your heartstrings, but it had better in order to make up for lost ground. Two and a half stars for the good – but nowhere near great – Arthur Christmas.