Santa and Weed Apparently Do Mix

When Harold’s father-in-law (Danny Trejo) brings the family to stay over for Christmas, things get tense when it comes to the decoration of a tree with sentimental value to the Perez family.

When an accidental fire destroys the tree and a reunited Harold and Kumar begin looking frantically for a replacement, the two again cross paths with Neil Patrick Harris who plays himself in one among many escapades that characterize this bong-obsessed play-by-play of outstanding stupidity. 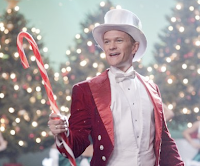 Yes, Harold and Kumar is (as expected) irreverently funny and as profane as a movie can possibly be, but this one tries hard to speak to the kid in all of us, and by just a little, pushes the right buttons. All of us, however, does not mean include anyone under 18, as this movie is fit only for the mature.

The usual sexually charged gags are here with harsh language and some nudity, and are accompanied by the likes of a penis frozen to a steel pole and a two-year-old baby getting “the munchies” after being exposed to marijuana and cocaine.

The film is generally funny, well shot, beautifully paced, and never fails to remind its audience of how nothing is to be taken seriously. And while the often stupid script tends to try the patience of audiences, it nonetheless succeeds at being entertaining with some respectable performances from its stars, particularly from Harris and Bobby Lee as “Kenneth Park.” And perhaps best of all, it doesn’t run too long.