Gary Oldman, Toby Jones, John Hurt, and Ciarán Hinds star in Tinker Taylor Soldier Spy, focusing on an ex-agent (Oldman) who is forced out of retirement to find and out a planted Russian mole deep inside British intelligence forces.

While the meat and potatoes of the story (another novel-based take on Cold War espionage) could have had much to offer, this whole project was shot to death right from the start.

The film's dramatic pauses, grave stare-downs, and unwarranted build-ups become wearying on the viewer. At 12 minutes in, we have no clue as to what is going on, and 30 minutes in isn't much better. By 45 minutes, we have the plot laid down, but advancement from there proves ever more troublesome. 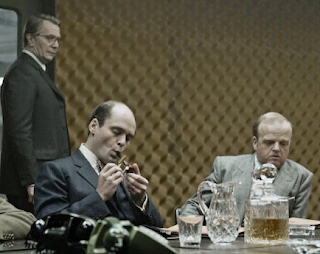 The movie is so riddled with melodrama, abrupt and uncalled-for scene-changes to confusing flashbacks, and agents spryly waiting to interrupt and tell each other off in the name of preserving classified information that things quickly start to look bleak. We soon begin to lose confidence in the story ever making sense with any sort of satisfaction.

While everyone fights over the preservation of government policy, our minds turn to mush from incompetent directing. The audience has little idea as to what is going on. And despite extremely long build-ups and tedious lengths gone to in the laying down of subtle plot details, no one here has much – if any – personality, and forgettable performances go with a totally forgettable movie.

A good start would been to try and construct a film that didn't waste so much time on detail overkill. 1 and ½ stars for the weak, wanton, and unworthy, Tinker Taylor Soldier Spy.
Watch Trailer