Cyber-lebrities are as Bad as Celebrities

November 15, 2011
Independent Film Review: iCrime (2011)
Summary: A girl heads to LA to do damage control for her fashion model cousin.
Spoilers: none “Carrie Kevin” (Sara Fletcher) is not like most girls who come to Hollywood to pursue distant dreams of becoming stars. She comes to LA to look out for her close cousin, “Stefy” (Kelly Noonan) who is an up-and-coming model, fighting her way to even higher heights by frequenting parties and seeking out the “in” crowd to get more recognition.

When a cutthroat tabloid journalist named “Evelyn Echo” (Katherine Randolph) gets her hands on a
videotape that could sink Stefy’s career, she finds that she must become the very LA-scene slime she so hates by getting Echo even more outrageous stories. This sets Carrie on the path of a teenaged cyber-lebrity sensation named “Jordan Rivers” (Leah McKendrick) who seems to have gone missing. While searching to get at the truth behind the story, she begins to solidify her realization that LA isn’t always a city of dreams.

The substance of iCrime starts and ends with a should-be-obvious fact that still eludes some: internet life is just too different from real life, which is why almost no one seems to ever be who they say they are online. Truly, LA is the city of angels and fallen angels, but the internet is still worse at its best. Our star is a kickative spitfire who is nearly always smoking as we first meet her while getting down and dirty with a cowboy to get a hold of a bondage sex tape in which her cousin is a star. She is always smoking for no other reason than to look cool. 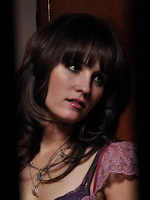 The occasional overacting early on is to be overlooked with the film’s performances that quickly start to win over viewers and get even better. iCrime portrays the LA scene perfectly, with its snotty obsessions with fashion, plastic surgery, flamboyant producers, and photographers. Nearly perfectly done are the nicely cut scenes. Only once in a great while do we hear or find a misplaced mic or editing glitch. The film’s larger-than-usual budget ensures that this independent film stands out.

Our problems begin when the story takes everything and a whole lot more and tries to build onto an already shaky structure. Carrie meets “Zeffer” (Travis Brorsen) who keeps saying his dad is a big-time producer, but he works at a supermarket. When the two finally pair up, we get so many multifaceted story elements that it becomes evident that the film almost outright refuses to take its story in any one direction.

The road from intro to conclusion is so zigzagging and long that it can only be taken as a tell-tail sign of a grievous lack of focus on the creator’s part. We have characters incorporated that play very minimal roles, with entire segments of film that take up way too much time, and the viewer feels it. The very long runtime is made worse by these mistakes.


What I like is that iCrime is a smart, trendy, unapologetic, and sometimes-funny film, one that never supposes its audience to be too dense to put together and appreciate its complex (and very indulgent) story. Despite the geeky texting, screen-name references, oscillating between vlog entries, clubbing, girly-girl bonding, and a general lust for vanities of LA-junkies, I’ve not seen anything like it. If it knew what it wanted to accomplish, it would have been an even better fit for a generation that chooses not to remember before Facebook or when cell phones didn’t have internet.