November 05, 2011
Movie Review: Paranormal Activity III (2011)
Summary: A couple finds that they are not alone when they move into their new house and their daughter has a menacing imaginary friend.
Spoilers: none 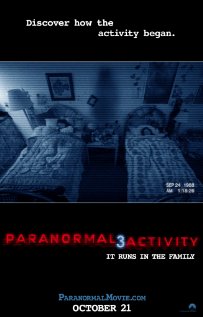 As innocent as children are, few things creep out admiring adults like hearing a child say a line supposedly uttered by an imaginary friend…who is standing right next to them! This is the prelude to horror in the third Paranormal Activity film that retroactively wraps up the series.

Part 3 and then parts 1 and 2 bring us full-circle. If you need a congealed summation of events in all three movies, go here where this spoiler-containing answer to a question puts it all in
perspective.

“Katie” (Katie Featherston) and pregnant sister “Kristi” (Sprague Grayden) and her husband, “Daniel” (Brian Boland) receive a box of old home movies. Some times passes and certain tapes are missing. We drop back to 1988 where a young Katie (Chloe Csengery) and Kristi (Jessica Tyler Brown) live with their mother, “Julie” (Lauren Bittner) and her boyfriend, “Dennis.” (Christopher Nicholas Smith)

Dennis is the first to notice strange things happening when stepdaughter Katie starts talking about an imaginary friend named “Toby” who plays an increasingly active role in her life. Dennis’ friend, “Randy” (Dustin Ingram) convinces him to start recording these strange occurrences that first aroused his attention while attempting to make a sex tape and he and Julie were interrupted by an earthquake. Debris falling on what can only be an invisible figure compel him to go all out on what becomes an obsession to get to the bottom of a disturbing mystery.

Now in order to even have a footage-found movie like this one, we have to have Dennis as the camera-obsessed, open-minded boyfriend who first begins to suspect a presence in the new home. It’s a good thing he’s intent on filming everything, has plenty of time on his hands, is quite practically never at work and never does anything not tech-focused, and has enough resources and a forgiving enough of a girlfriend to put up with this video-craze phase.

It must take a lot to put up with a man who will carry a camcorder around even when the safety of his family is at risk. But even during private mother-daughter talks, Dennis doesn’t turn off the cameras and Julie doesn’t make him or turn them off herself. He doesn’t mind going through the boring footage to get to the good stuff. And despite her portrayal as the antithetically closed mind that resorts to frequent on-camera protests, she is actually very tolerant of his hobby.

Paranormal Activity III gives us almost the same horror format as in the previous movies, but the details are mixed up to explain what happened in parts 1 and 2. A slow opening accompanies strange sounds and odd occurrences. These are sandwiched between normal family home movie footage. This leads to more pronounced worries before, finally, even Julie the skeptic is convinced that they have to get out fast.

Meanwhile, an “investigation” has been going on, during which references to an obscure witch cult surface (actually, these surfaced in part 2 if you paid close attention). This is before small ghostly activities are replaced with an invisible, “hands-on” evil presence that is nothing like spirits that haunt houses we’ve come to hear of today. Part II upped the ante with the deadly and so does part III, but this makes both films less scary. Part I, by contrast, was epically scary. 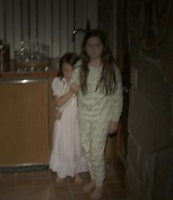 Dennis not only sets up cameras to cover every blasted square foot of the house, but due to depleting funds, sets up his girlfriend’s favorite oscillating fan to have stationary cameras cover a wider range. This and other minute visual improvisations succeed at making the viewer want to keep watching, but they don’t add much of anything else. Our two child stars, on the other hand, earn our respect by providing us with finer performances than we’ve seen in recent years.

There are some powerfully hair-raising elements here that will for sure give audiences the chills they are expecting, but the payoff remains small. The long-wait, slow-reveal is supposed to engage us, but the supernaturally over-the-top story relies on nothing more than creepy cult-lore and homicidal spook activity. Yes, it’s scary, but it doesn’t strike us as anything that could happen.

In the end, we have another hone-in/hone-out supernatural camcorder thriller where we’re slowly introduced to a deadly terror unlike the hauntings we grew up hearing about at a friend’s house with the lights turned out. And once we open the can of worms to demonic massacres, we’ve crossed over from unseen horror territory to Halloween/Freddie Krueger-land—a less scary place than back home under the bedcovers where dark forces plague the living with things that go “bump” in the night.