The Clear Alternative to Transformers

October 11, 2011
Movie Review: Real Steel (2011)
Summary: A dejected robot-boxing promoter and his son believe they have found an unlikely champion in a discarded junkyard robot.
Spoilers: none 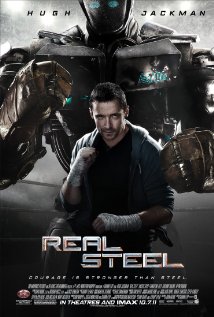 Real Steel is about robot boxing, an essentially unheard of thing in movies. Were it not for shows like Robot Wars with competing wrecking machines, it would be unheard of almost all together.

But Robot boxing is a huge thing in the not-too-distant future. These bots are controlled either by way of auditory commands or through a video game-like interface.

But first and foremost, Real
Steel is about family. “Charlie Kenton” (Hugh Jackman) is a broke robot boxing promoter who, in better days, used to be a real professional boxer.

In these lesser days, Charlie owes a number of people money—more money than he has. He lives his life watching his back and getting bots ready to fight in local boxing matches for ridiculously small amounts of money, which only allow him to scrape by until the next repeat performance.

When Charlie learns that his eleven-year-old son’s mother has died and that his custody case is being tried in court, he is reluctant to even show up for the hearing. But after an arrangement is made and the young, mouthy “Max” (Dakota Goyo) is back in dad’s life, the stubborn and almost criminally irresponsible Charlie will undergo some changes. 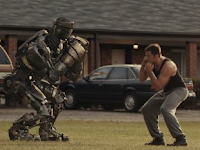 After a disappointing string of losses, Charlie and Max find a discarded old sparring robot in a junkyard. He is named “Atom,” and when fixed up, entered into small-time fights. When the unlikeliest of unlikely victories start coming in, we have the groundwork laid for what becomes a very heartwarming movie.

Take Transformers and meld it with Rocky and you have Real Steel. And I’d prefer this over any Michael Bay adulteration of what we used to know and love any day of the week. I don’t think this is competing with Transformers, but there would be no competition if it did, as this actually has a story and components that are significant to human beings and human interaction. These cover for a few bothersome flaws.

But I have little doubt that Transformers was the motivating factor behind the film’s premise. We see these big, lumbering machines move and we have to assume so. Either that or regular boxing has just gotten too boring for today’s ever-more technically inclined, nerdish youth.

The movie does well at creating a believable environment for its plot of fighting machines that are made to emulate our actions. Too bad when it comes to some human characters, the film takes a bit of a dive in quality. Charlie’s hoodlum crowd talk with exaggerated Texas accents and sound like radio talk-show hosts trying to be funny. Others are simply goofy exaggerations of fringe thrill-seekers.

As with most movies centered around family virtues, we get more effort put into the protagonists than the antagonists, who here are little more than hammy representations of redneck, black-market brokers and stuck-up Asian kingpins in the bot-battling business.

We are never given much from the technical side of these bots, and that may be for the better. It is mentioned that an older bot was from 2014. They cut it close! I hope we have mastered bots that can actually perfect the art of simply walking up a flight of stairs by then. But I doubt it.

These bot fights are exciting and generally well choreographed, though we don’t care about the results until mid-film when see a vivid relationship being built around Atom between Charlie and Max. 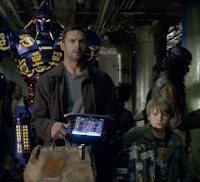 The mechanics of battling bots, I suspect, are off. Designing monstrous machines to dish out this kind of punishment on each other in match after match would give us cause for concern. A. Because it would cost a lot more than mentioned to repair and maintain them. B. Because they would be used in crimes and law enforcement would have to have preventative measures taken against them. C. Because the events would have to have better safety protocols in place to prevent these things from accidentally killing spectators, and D. Insurance policies would have to…well, like I said, it’s better that we don’t go there. And we don’t need to go there.

But if there are any human, emotional elements that don’t ring true with the viewer, there won't be many. The film is fast-paced and exciting with an imaginative story that anyone in the family can relate to and love.

Jackman’s and Goyo’s performances are enough to capture our affections. No awards here, but to call this anything less than inspirational would darn near be a crime.