This movie is a monstrosity. Most would say an epic failure. I can’t even say I disagree. I can only think back at how I watched in total disbelief while laughing violently, sometimes struggling to catch my breath.
Writers Nick Swardson, Allen Covert, and Adam Sandler came together to craft a movie that no one without brain damage would continue watching for longer than 10 minutes. Bucky Larson: Born to be a Star was that movie. 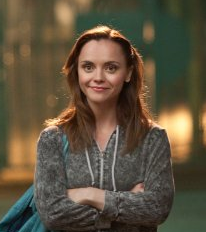 At a diner, Bucky meets “Kathy McGee” (Christina Ricci) who gets to know and like him. Kathy has a fear of dropping serving trays with hot contents onto people’s heads. Through his understanding and childlike demeanor, Bucky helps her to overcome and train to be the best waitress ever. L.A. truly is the place of dreams!

He meets “Claudio” (Mario Joyner), a commercial director who introduces him to modern porn-star legend “Dick Shadow” (Stephen Dorff). But Bucky is not well received by Shadow because his “equipment” isn’t up to spec like others in the industry. Rejected, Bucky runs into “Miles Deep” (Don Johnson), another adult film director who gives him a second shot (yes, literally, another “shot”).

Bucky’s roommate and landlord “Gary” (Kevin Nealon) is a paranoid loser and a chump who can’t stand him. We can't stand him either because (if it mattered) his is one of the worst performances in the film. Everyone except Swardson, Ricci, Johnson, and Joyner are actually a part of the reason this movie is such a Wild Card of whackiness.

Everything, down to Bucky’s bowl haircut, his obviously artificial buck teeth, the down-home redneck stupidity, and mentally challenged naivety can only be viewed as an attempt at being funny outside of what we normally consider funny. This is outrageous. No one would think to pursue this. Who would have the audacity to subject an audience to this? I can think of three writers.

But let’s look at the facts; Swardson puts on the funniest performance of his career, bar none. I’ve never seen him so into a part. And while a bunch of other performances here are just victims of balls-to-the-walls, bat-shit writing, the net result is humor that will most positively NOT have you watching in disinterest or boredom. This movie will change you! It's a winner-loser of grandiose proportion. It can't get anything it wants to do right. 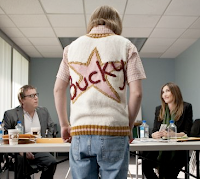 The budding romance between Bucky and Kathy is as laughable as everything else in the film. We have that played-upon stereotype of a beautiful young girl admiring an ugly, dorky guy just because he’s “nice.” Yes, it’s stupid and uninformed, but like Kathy's dreams, is only one on a long, long list of reasons to make you laugh until you choke.

We are, after all, supposed to be in the mood to laugh when we watch a comedy. And the humor is relentless, if also a track record of miserable failures (which kind of means it succeeds in failing if you think about it). It never stops for more than a few seconds, and even when it purposely stops being funny for the sake of working on other emotions, it won’t let you forget that this whole thing is for cheap, stupid laughs and nothing more.

The mockery and cinematic self-abuse continues. There is little actual female nudity, mostly just (genuinely hilarious) ejaculation gags, finger-in-butt references, and gay men talking about eating lots of pineapple to keep their partners from being dissatisfied with south-end stink.

We conclude by acknowledging that not many movies with absolutely no target audience can insult the intelligence of all classes of viewers and yet still exhibit such determined vision in the directing. Entire theaters may want to get up and quickly walk out (you may as well), but for those who are ready to laugh at the raw, inexpressible unbelief of the whole project, they stand to have a fabulous time.

There is nothing wrong with pursuing a labor of love. And someone had to really love this project for it to ever get made. It took balls to promote it, too. This is the type of stuff that gets you laughed out of an office!

The film is ungradable. It defies classification. It can be neither good, nor bad. The terms “pass” and “fail” mean nothing here.