Losers of All Types are Funny

October 06, 2011
Movie Review: 30 Minutes or Less (2011)
Summary: Two fledgling criminals kidnap a pizza delivery guy, strap a bomb to his chest, and inform him that he has hours to rob a bank.
Spoilers: none 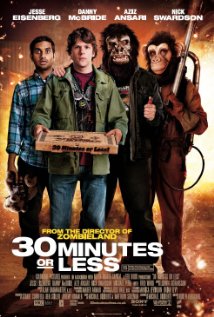 Two small-time criminals kidnap a pizza delivery guy, strap a bomb to his chest, and inform him that he has only a few hours to rob a bank or blow up.

"Nick" (Eisenberg) hates his job as a pizza delivery guy. His former best friend, "Chet" (Aziz Ansari) hates him for sleeping with his sister. The two are compelled to work together after Nick runs into "Dwayne" (Danny McBride) and "Travis" (Nick Swardson) who decide to use Nick to make them rich.

It's not just the story in this old-school tribute to "buddy" comedies that is so tasty, but its uniquely picked cast and fine performances that serve as nearly flawless examples of character development. 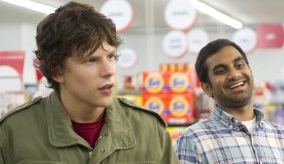 Ansari is a show-stealer with his wide-eyed panics. Loser "Dwayne" (McBride) carries a fatalistic intensity that moves the audience as much as Dwayne's straight-laced, ex-military father, "The Major" (Fred Ward) who despises his son and his loser pal.

The film's seriousness never threatens to outweigh its obvious comedic undertaking, both in terms of the characters it gives us and the story. This smile-inducing and funny film has plenty for audiences, like double-crossers, gangsters, the cops, and the utter ineptness of Nick and Chet.

We do more than care about what we're watching. We begin to want more of it. It might not always hit its mark, and a few plot modifications would have propelled it even further, but we can't ask much more from a movie like this that is more than entertaining enough to make it a hit.

Three and a half stars for the stylishly endowed and well-directed good time, 30 Minutes or Less.