It’s Like a Demented Version of Fiddler on the Roof

October 13, 2011
Independent Film Review: Strigoi (2009 / DVD 2011)
Summary: A young man returns from Italy to Romania and suspects his family to be involved in a murder.
Spoilers: none 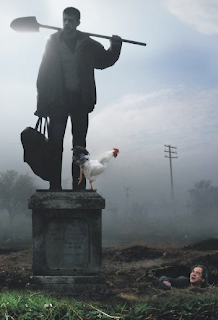 “Vlad Cozma” (Catalin Paraschiv) returns from Italy to his Romanian village. Upon arriving, he discovers a local man dead with signs of strangulation and becomes convinced his family is trying to cover it up. The more Vlad investigates, the more he finds those of his village convinced that they know what happened and himself unable to accept their conclusion.

But concerning two other murders, when the village
killed the tyrannical mayor “Constantin Tirescu” (Constantin Barbulescu) and his wife (Camilia Maxim), they believed it was justice. Now, Constantin and the wife are back and really, really hungry.

Strigoi, we are told, is a Romanian myth that refers to the undead. The film connects the theme to vampires through food—undead binge eating and it is not a pretty picture. It’s usually not even really a funny one, but most of all, it's not romantic or charming in the least.

How much can we expect from a low-budget movie with a tagline that says: “Real Vampires Don’t Just Drink Your Blood”? Faye Jackson’s Strigoi intends on serving up a double-portion of a well-choreographed, atmospherically-endowed take on the undead that doesn’t go the way of boys taking off their shirts or changing into werewolves to appease 13-year-old, “nobody understands me” Goth-girls who wear black lap-stick. He succeeds. 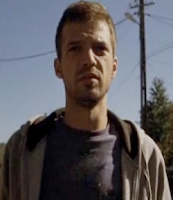 But this vampire movie doesn’t offer anyone what they want, and certainly not what they’re used to. Whether or not the movie meets its goal will be determined by the only things it does effectively: gross us the hell out and make us think how terrible it would be to live in this sick, gloomy world with people who display such dodgy behavior. But isn’t that what a good horror movie is supposed to do?

This is a long and rather slow film, one that could have used some trimming both in terms of content and what we are shown. We are treated to scene after repetitive scene of the undead raiding kitchens and eating with their hands like Ethiopian children getting ready to expire. I never realized how stomach-turning that could be to watch until seeing Strigoi.

Scenes of eating, of incessant smoking, of monotonously talking about village history that involves communism and land disputes, and in a town where we only have one law enforcement officer who is accountable to no one (apparently), leaves us unsurprised when the movie itself deserts us with plenty of unanswered questions at its end. 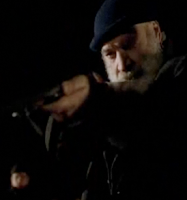 It would almost be better to get something traditional – with, heaven forbid, shirts off and wolf boys? – because if we had that back, we’d at least be entertained (well, somewhat entertained). This is a jaded, spacey, and unattractive void, an attempt to add hit-or-miss comedy to what could have been ferociously scary and in settings with dauntingly old churches in a village where you’d expect to find a myth like Dracula come to life.

What we are given does not quite do its material justice, nor is it particularly brilliant, and for sure, it’s not the future of vampire movies (though I have no doubt that some of these ideas will be stolen and expanded upon in upcoming vampire works by hack directors). But Jackson knows exactly what he wanted and gave it to us as he saw it. It feels like a demented version of Fiddler on the Roof, but way, way more depressing, one where you’re left being glad that there are other places to escape to.