I’d Be Afraid of Demon-possessed Rats, Too

October 06, 2011
Movie Review: Don't Be Afraid of the Dark (2011)
Summary: A young girl goes to live with her father only to find hellish creatures in the walls of the mansion.
Spoilers: none 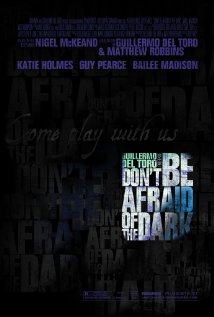 "Alex Hurst" (Guy Pearce) is an architect specializing in the restoration of historic Gothic homes. He and his new girlfriend, "Kim" (Katie Holmes) have the house to restore, but their already full plate of a large workload and important deadlines is met with the equally full-time job of raising Alex's daughter, "Sally" (Bailee Madison) who is psychologically troubled.

While combating the already daunting feelings of being out of place in a cold and drafty mansion, Sally must get
used to Kim, a woman who, despite reaching out to her, is rejected as a confidant and parental figure. Sally would rather be at home with her mother in LA.

Not long after arriving and finding an old storage seller with a deep ash pit bolted closed, Sally begins to hear voices telling her to come and play. But after some assurances from these uneasy hisses that they understand her and sympathize with her (unlike her harsh parents who “don’t understand”), their motives become known, and they are far from friendly or playful.

With her father refusing to believe her and a perpetuation of strange and random acts of vandalism and attacks on people, all young Sally has is an unlikely friend in Kim who slowly begins to piece together the horrible history of the house and its owner from generations back who spoke of demons who feed on human victims. These things have a special appetite for human beings, and particularly, human teeth.

Among the film's strengths is a charismatically enduring child star who fast wins over audiences as an explorative, delightful kid whose only deficit in the film is the ability to reach the high-end emotional intensity her role demands. And honestly, it bothered me greatly that with all young Sally sees that she would ever DARE set foot back in that house after the very first attack, even if a parent told her to with the threat of punishment. I’d have been running for the hills! 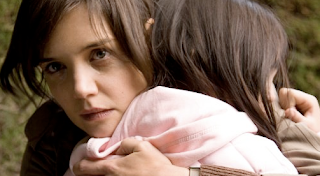 With that and the rain and cloudy New England weather, we have a great Halloween movie and a film with a familiar-but-respectable – and very effective – setting for a horror movie. This one about equals the original film bearing its name (1973) that it seeks to improve upon, but it is unfortunate that the film misses plenty opportunities to be legendarily scary and instead settles for just being a kid's nightmare.

To make the story more compelling, hauntings always have to happen to children with problems of some sort to augment an element of disbelief. Just once, couldn't we get coo-coo religious parents and it’s the kids who are the sane ones? But I suppose it doesn't matter. No one believes anything evil is happening until it’s too late, except for Kim who at least has an open mind. The bloody assaults and horrible occurrences are dismissed as “accidents” and the work of a disturbed child.

One would think that CGI demons of small stature can only be so scary, but if you hate rats, I suppose that will mean more than I make of it. But this film – when thought about towards the conclusion and after it is over – is actually pretty darn scary. But getting there, the logistics threaten to give us a problem.

Seeing menacing little quad-sized creatures from hell tying and dragging unconscious men and women down hallways has a longer-lasting effect than you might think. But nobody in this film takes the details of their circumstances seriously enough. When these creatures slam doors and lock them (a favorite tactic), nobody thinks to do a running lunge or to kick them open. 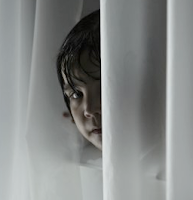 And people seem to be rather easily knocked unconscious. But these instrument-wielding, “slice ‘em up,” advantageous little demons don't always use their opportunities to kill, either. But you'll forget about these things with the film's loyalty to the horror genre.

The story is not the problem; the lack of super-high emotional panic peaks is. Pearce is under-utilized in his role, as is Holmes, but with Madison's projected innocence and a story that creepily seems to be targeting younger viewers (despite its disappointingly undeserved R rating), this movie has something going for it, and even adults will be touched with the chills. The movie offers the beginnings of good horror, and for that, it is to be commended.