(Don’t) Take Me Out to the Ball Game 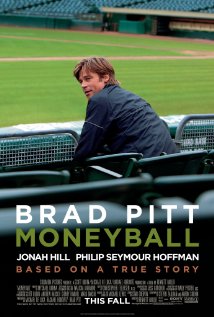 Moneyball is based on the true story of Oakland A’s general manager “Billy Beane” (Brad Pitt) who, in 1997, was promoted to his position and made history with a virtually unmatched winning streak from 2000 to 2006.

The movie is based on events as told in a book by Michael Lewis entitled Moneyball: The Art of Winning an Unfair Game, which focuses on Beane’s injection of computer-generated sabermetric statistical probability into the game.

The story begins with the team’s central predicament; a critically low budget prevents the team from winning the World Series. Beane’s
challenge is to use the meager means at his disposal to manage the team and bring it up to its potential. Frustrated and out of ideas on how to proceed, a struggling Beane shows us from the outset the same man we see for the whole duration of the movie—a depressed and cognitively dissonant coach who knows more than he cares to explain and whose ego largely defines him. 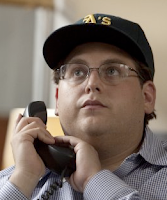 Without an intimate knowledge of baseball history, Moneyball is somewhat of a challenge to relate to. Even when we want to appreciate what we can of the impassioned parts of the story – particularly the heated conflicts – it is because of the confused narrative that this becomes halfway difficult to feel for, even when we want to feel for it. We hardly ever know whether to rejoice or mourn, and when we do, the mood changes.

When Billy meets “Peter Brand” (Jonah Hill), a 25-year-old man with an economics degree from Yale, he is quickly impressed with his statistical knowledge of the game and how he sees what the players offer on a purely numerical estimated value of their talents. Taken on board, Brand helps Beane to come up with the idea of bringing in the least recognized players in the industry based solely on their numbers. When the advisory committee objects to the strategy, we begin to see the animosity Beane faces.

Director Bennett Miller is counting on the audience to make the connections between every decision made. If you know the story and can see the significance of what is done, then good for you. For the rest of us, we get a dry showoff of our two leads and not as much baseball-playing as you’d think. We don’t see a team wanting to win beyond glimpses.

Seeing the team through the eyes of Beane is a different experience for Beane than his players. They wonder why they get so little encouragement or interaction from their GM, a thing Brand tacitly points out to him. When the film begins and we get used to the back-and-forth of dry-erase boards, graphs on computer screens, and arguments between advisors, coaches, and Beane ad nauseum, we find that this film – aside from being amazingly well-acted and keenly written – feels long and rather uninspiring—having less to do with baseball than with a guy who has trouble getting emotionally involved in his work. 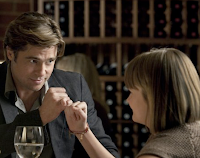 Beane’s 12-year-old daughter, “Casey” (Kerris Dorsey) is the only source of joy in his life. When he isn’t teaching Peter how to toss players off the team and show that he’s ready to risk his job for his agenda, he’s knocking things over in disgust at his players losing.

When the wins come, we get history. More history. And if you follow the Oakland A’s, this might mean a lot. To the rest of us, it is less than Rocky with Beane drinking coffee in nearly every shot, making and hanging up conference calls to show how much of a bad-ass decision-maker he is, and sporting his easily projected pretty-boy stubbornness.

Production value aside, Moneyball is more about your paying money at the box office to see Brad Pitt and Jonah Hill and not so much about anything else, at least not for non-fans.