October 01, 2011
Movie Review: What’s Your Number? (2011)
Summary: A young woman becomes obsessed with having slept with too many men and seeks to make one of her old ex’s “the one” for her.
Spoilers: none 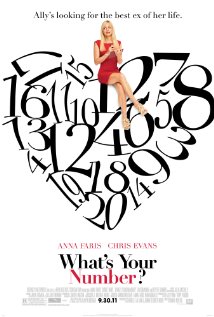 In a raunchy attempt to be romantically entertaining from both male and female points of view, What’s Your Number? is about a young woman named “Ally” (Anna Faris) who comes across a magazine article about how many men the average woman sleeps with in a lifetime. This makes her self-conscious about the fact that she has doubled her quota in the few years she’s had on earth, but has not found love.

At this point, Ally goes on a quest to get in touch with
several of her flings to re-ignite some old sparks (to avoid increasing her total by hunting fresh game). Her desperation doesn’t bother her as much as it does the audience. Making this worse is the fact that she lives across the hall from a young man, “Colin” (Chris Evans), who looks all of dippy, immature, playful, and photoshopped. As it turns out, he can’t stand the woman in his life.

After expressing that they are never, ever in a thousand worlds going to be right for each other, Ally and Colin agree to work together to find the men she is looking for and to help him get rid of the woman he doesn’t want in his life. It’s a criss-cross sleaze contract between two beautiful people. Just guess where things go from here.

In a clearly cheap, Cosmopolitan Magazine, girl-bachelor-party sort of way, What’s Your Number? tries to represent a woman’s search for a man as a wanton mission, filled with grief and heartbreak. You don’t need a movie to tell you that sharp-looking guys will break hearts. That makes most of this romantic crap superfluous right there.

As stated, Colin looks photoshopped, and that means he must also be a womanizer with the morals of a stray cocker spaniel. But the competitive spirit of Ally threatens to bring out in him better qualities. Neither of the two are happier apart, and she doesn’t want to go back to jumping in bed with former boss, “Roger” (Joel McHale) and get hammered enough to not remember what happened at the conclusion of the previous night’s party.

Few straight men can relate to McHale, and a lot of men don’t like women who look like Ally and yet groan inside for not having found “the right guy.” Everyone can relate to the loneliness of being dumped or else lost in the endless search for companionship. What they don’t care for is those in the dating game who don’t know what they want, such as people like Ally who can have everything.

The film has very little respect for the women it wants to relate to and not a lot more respect for the men. This is why it throws in as many sexual details as it can, including shots of guys smelling their fingers after sexual encounters. It figures, the raunchier, the better--cheap, sex-obsessed, college-age pandering is the way to go when you lack a fresh story.

It does have a few good comical skits that take the viewer by surprise (but do not watch the trailer if you want to see these because it gives away most of them). There is even a wholesome message about being yourself and pursuing what makes you happy. But mostly, it’s just more of the same romantic comedy junk we’re used to. 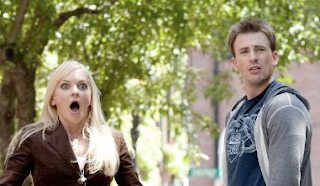 How much appeal can a movie really have with two unsatisfied people who are both good-looking and can get anyone they want? The performances here are so very medium-grade. So how are viewers supposed to relate to this? By appealing to the young, pretty, full of booze, and half-stupid crowd, that’s how.

And that, of course, becomes the two’s predicament with an agonizingly predictable outcome; these two have to search high and low to make sure they’re both satiated with each other before they will consider committing—because like the dogs they are, it doesn’t take much for this breed to find some excuse to put themselves “back on the market” and resume the futile search. Almost pathetic.