October 07, 2011
Movie Review: Abduction (2011)
Summary: A boy discovers his parents are not his real parents as he is caught up in the middle of a CIA covert operation.
Spoilers: none 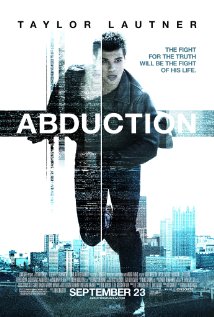 As the Twilight saga winds down to a much celebrated halt, we find arrangements being made to preserve the acting career of one of its hunks. This arrangement is in the form a cheap thriller spy movie called Abduction. We are talking, of course, about Taylor Lautner, the beefy-shouldered, washboard-abs wolf kid that so many girls have taken a liking to.

So how well does Lautner do as an action buff? Well, not
as bad or as good as we’d expect. Abduction is a problematic work for sure, and the problems start with the title. There’s no “abduction” here at all. The movie is a creation of John Singleton, the hit-and-miss director who brought us the award-winning Boyz n the Hood (1991).

In Abduction, “Nathan Price” (Lautner) is the son of “Mara” (Maria Bello) and “Kevin” (Jason Isaacs). His next-door neighbor and childhood crush is “Karen” (Lily Collins). When the two are given a homework assignment, Nathan runs across a Missing Persons website, leading to the discovery that his parents are not his real parents (but honestly, if he can’t just look at his parents and know that he can’t possibly be their biological child, he has some kind of mental defect).

As Nathan and Karen soon find themselves on the run from the strange men who are sparing no expense in coming after their friends and families, they find help from “Dr. Bennett” (Sigourney Weaver), Nathan’s psychologist who has been there since his youth to help him with anger management. There is a back-story involving his reasons for needing counseling. It just so happens to not do anything to actually help the plot.

On the run from what seems like the whole world, the two kids find themselves chased by some very bad people on and off the US government’s payroll. “Viktor Kozlow” (Michael Nyqvist) is a Serbian operative and seeks a computer file that both the CIA and his own organization are after. With these on-the-run youngsters fleeing for their lives and trusting no one (and having to kick some ass along the way), we are presented with a movie with bigger aspirations than its writing will comfortably allow for.

We open with the usual partying youngsters who pride themselves on underage drinking. And then we see young Nathan Price become a man sooner than he expects. The film has a good and moral message behind it about appreciating those in your life before it’s too late. And I even like the way the plot leads into a movie that doesn’t pride itself solely on smoochy-face make-outs.

But beyond that, we are going to have problems hunting for compliments. Abduction is a nearly passable spy movie aimed at teen audiences. As such, the dialog is blunt and sappy, and at some places, almost gagging.

As a spy thriller, it features some of the usual high-tech gadgetry, and as with almost all spy movies, these computers can trace anyone anywhere in America. Black-colored, government-issue SUVs will be outside your home only seconds after you chat using so much as a given word they’ve been hunting for. The computers know and do everything and every CCTV unit in any hospital can be infiltrated by the CIA and used to find you.

When these agents of the government manage to make contact with Nathan and Karen on the run, they offer protection, which you probably already guessed isn’t good enough. These agents brandish guns openly, despite state and local laws, and no one is ever around in cafés or streets to complain to the cops. And why complain because these are government agents, after all, and movies have taught us that government agents can do anything they want whenever they want! But of course, they’re no match for the REAL bad guys when they get there.

Nyqvist’s is the only performance in the film worth actually praising. And concerning Nathan and Karen, whether its romance or action, we get the same one-dimensional qualities of straight faces and a lack of genuine emotion. So which is worse? Wooden acting or kid-verses-terrorist hand-to-hand combat where, despite hard face kicks, the enemy’s glasses stay on his face? You decide. 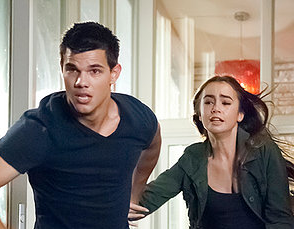 The whole effort is not quite as bad as the average heterosexual action buff would guess. Truth be told, most of the problems here are not his fault, but the writing’s. But if we remember that, this end-of-the-Twilight-series prep work for a career extension isn’t as terrible of a movie.

No, we don’t care too much about the project or anyone in it, but we don’t feel much worse off for watching, either.