September 25, 2011
Independent Film Review: Asylum Seekers (2009 / DVD 2011)
Summary: Six people on the verge of a breakdown decide to check themselves into an insane asylum, only to discover there is just room for one.
Spoilers: none 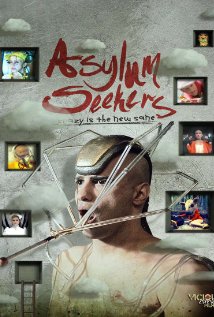 Asylum Seekers: These terms make us think of refugees and the delightful conditions of third-world countries run by dictators where those fleeing from them must canoe across muddy-watered borders in hopes of escape. Not exactly the setting for a traditional horror movie, for which reason we readjust our focus to insane asylums.

Now what do we think? How about straightjackets and electroshock therapy conducted on restrained subjects? Better. The torture
of naked, helpless patients is almost a cardinal pillar in a whole sub-genre of horrors and horror comedies, and I like the sound of it from the start. Does that sound good to you, too? Well, you’ll get none of that here.

Unfortunately, appeal in name is nearly all of what the 2009 independent film Asylum Seekers has to offer. Other than a totally mesmerizing use of its low-budget imagery to convey emotional shifts to give a fit and finish far above what we would expect, Asylum Seekers is a disjointed misadventure of six mental cases that long to be accepted into an asylum for the mentally insane—all we need in the world is a movie about crazies where they think life in an asylum is something to shoot for as a goal! 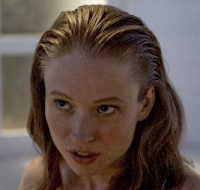 The group has it in their heads that their lives will be better in a nut house. The problem is that only one bed remains, which is why they must compete to find out who the luckiest crazy among them happens to be. This competition is the movie as it unfolds before its audiences with intricate colors, theaters, dinosaur skeletons propped up on shoulders, and animal head masks.

We have “Alan” (Bill Dawes) a wannabe rapper who seems to have some sexual identity issues and “Alice” (Stella Maeve) who has a fetish for electrical shocks. “Paul” (Lee Wilkof) is like a commando who takes solace in bunkers and weapons, but is too whacko for his own schemes. “Maud” (Pepper Binkley) is being pushed by her husband to have twins, but she doesn’t want twins or kids. She spends her time assembling things by tens. “Dr. Raby” (Daniel Irazarry) is a twitchy virgin who has done a good job taking on the bald look and being neurotic.

Since none of the other critics apparently have the courage to call this one out (due to that subconscious nagging fear of being ridiculed for knocking a “work of art” that might just be over their heads), I’ll go ahead and make the point that everyone who has seen the movie is itching to see in print online: Asylum Seekers offers us nothing of what we want or expect in a film about mental institutions. Its full-on escape into surrealism makes it not so much a psychological analysis, but a ridiculous waste of film and time.

Not everything that is symbolic or artistic is brilliant. Some directors forget that. The film’s sexual overtones are strong – and in more than a few places, a welcome relief to the pointlessness we find ourselves enduring – but as with everything here, the project is crushed underneath a mother-load of artful and color-based bombardment, giving us a film with no real meaning about anything.

There is no story. It isn’t funny or insightful, though what’s really unfunny is a director with this much highly charged knack for visual creativity wasting his talent in the vessel of a poorly told story such as this. What we have here is an artful and tasteful assemblage of colors, props, and themes, with eccentric characters that revel in their insanity while the producers somehow think this will entertain us. Wrong. The movie is more insane that the people in it.