"Pretend You Are a Brain-dead Mule Lost in the Desert"

August 17, 2011
Movie Review: The Change-Up (2011)
Summary: Two long-time friends switch bodies when they wish upon a fountain that they had each other's lives.
Spoilers: none 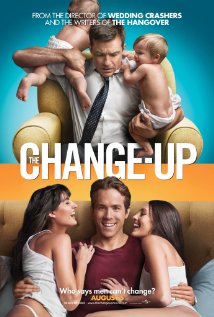 There a few things on my list of many things that I’d love to see movies at once stop doing. These aren't relatable. They aren’t funny. They aren’t even cute. They are cliché and stupid. They are...

3) Having a parent wake up to tend to a crying baby in the middle of the night, having been told: “your turn.”

4) Having babies get into mischief and throw sharp objects with near-miss accuracy as the blades get stuck in the wall near their parents’ heads.

5) Having babies crap or pee in their parents’ faces.

6) Arrive at weddings just before the vows are said.

All of these things happen in The Change-Up, starring Jason Bateman, Ryan Reynolds, and Olivia Wilde. The film is about two long-time buddies (Bateman and Reynolds) who switch bodies after making wishes while urinating in a magic fountain.

In the film, we have all of the usual clichés about two guys who find the grass greener on the other side of the fence of each other’s lives (If you have half a brain, you already know how the movie will end based on the premise alone).

“Mitch Planko” (Ryan Reynolds) is a jobless quitter with as much time on his hands as he could want. His shameless life of commitment-free sex and drink-accompanied bong binges attracts “Dave Lockwood” (Jason Bateman) who is married to “Jamie” (Leslie Hand).

Dave is a successful lawyer and about to make partner at his firm. His life with an active schedule of a wife, picking up kids from dance recitals, and being the man who always works to make a better life is about to be turned upside-down when he finds himself living in his best friend’s body.

Soon after the shock of discovering the change, Mitch and Dave run around town and try to locate the magic fountain and undo what was done. But to expand their shock, the fountain has been moved.

Huh? Yes, somehow, a concrete fountain was broken up and re-laid somewhere else in the city in the space of one night. It will take them up to 3 weeks to find out where it has been moved. In the meantime, they’ll have to wait and live each other’s lives and pretend nothing is wrong. And what better way for Mitch to tell Dave not to pick fights with his wife by reminding him: "Just pretend you are a brain-dead mule lost in the desert."

The Change-Up is like a 2011 version of Tom Hanks’ Big (1988) with a very raunchy, profanity-laden bend. The plot is so predictable, so engorged with smut, nudity, and alley cat sex that if you aren’t taken in by the workable performances of Reynolds and Bateman, you’ll have to stand by and cheer on the near-boundary-breaking risquéness. That’s how it is supposed to work.

Minus its many clichés and thoroughly stupid components, it almost did work. I enjoyed the movie. But that doesn’t make it a good movie. It would have faired worse had it not gone in the direction it went in. The idea of a magical transformation alleviates us of the confines of reality. There’s something exciting about getting to live someone else’s life. But beyond that and the over-the-top sexual escapades of contrasting a successful man with a grown-up-but-immature man, this film is as hollow as the logistical pitfalls it succumbs to.

The producers are counting on the fact that you’ll be so enamored with the comedy and smut that you will forget all about how Mitch in the body of Dave can’t possibly continue Dave’s law work since he has no knowledge or experience as a lawyer, much less a top-notch lawyer like Dave. And yet Mitch’s Dave seems an improvement on the real guy. How does he do it? He just "wings it" in meetings and his crude calls turn out to be the right moves.

There is some humor and just a few genuine and worthy performances over the short-term. One of the better performances is from “Sabrina” (Olivia Wilde) who was given a distinct and insatiable personality to go with her dynamite looks, which she plays up well. But we needed more here than just a few elements done right. We needed some better writing and a better vision.