August 05, 2011
Movie Review: The Smurfs (2011)
Summary: When the evil wizard Gargamel chases the tiny blue Smurfs out of their village, they tumble from their magical world and into ours.
Spoilers: none 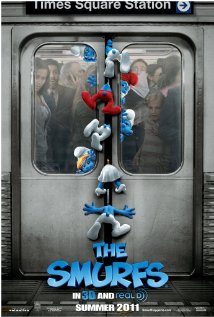 Those who grew up watching The Smurfs might take interest in this, a first-ever Smurfs movie. We’ll put aside the anticipatory dread over how badly a film can be botched and come right to our conclusion: The Smurfs may lack the magic, nostalgia, and even some of the innocence of what we had hoped it would bring, but it’s not all bad. In fact, depending on your age, it may even be good.

546-year-old “Papa Smurf” (Jonathan Winters, voice) has 99 three-apples-high smurfs under his care. These little blue creatures live in a magical forest inside of hollowed-out mushrooms. Their song-filled, joyous lives are cautioned with sobriety only in being on the lookout for the evil wizard, “Gargamel” (brilliantly and repulsively played by Hank Azaria) with his pernicious cat, “Azrael.” After being chased from their invaded village, a handful of smurfs find themselves thrown into New York City where their pursuit by Gargamel continues.

After arriving, the banded-together smurfs – “Grouchy” (George Lopez), “Vanity” (John Oliver), “Greedy” (Kenan Thompson), “Handy” (Jeff Foxworthy), “Clumsy” (Anton Yelkin), “Brainey” (Fred Armisen), and “Smurfette” (Kate Perry) – meet “Patrick Winslow” (Neil Patrick Harris) and his pregnant wife, “Grace” (Jayma Mays) who agree to help them search for a blue moon to open a portal to get back home. But getting back home won’t be easy when Gargamel unites with Winslow’s corrupt boss, “Odile” (Sofia Vergara) who agrees to help him seek out and destroy the smurfs.

Lamenting adults who sat through The Smurfs only for the sake of their children may still not have the presence of mind afterwards to immediately appreciate that they actually laughed a time or two before rolling their eyes at what followed. This film is memorable, not only for its queerness, but also because it brings boatloads of chuckles to its primary audience of little ones—an audience the film never loses sight of for an instant.

About as impressively, aside from taking place in New York, the film absolutely refuses to give way to cliché. Consider that when we are first introduced to the Winslows, you suspect that their lives must be in some way deficient and the smurfs are going to set things right. Not quite. Patrick is Vice President of Marketing at his company and has but a few days to come up with the perfect campaign under his beautiful but cruel boss with just a little more personality than one of the minx coats in her closet.

While no one except the smurfs are supposed to have any real level of depth, we come to not want any one character to take our focus off of the whole silly picture. We want our kids to be swept up in fast-paced fun that will take our minds off of the fact that what we are watching could be called torture.

But we have here a successful fantasy CGI movie, just not one with any dignity or maturity—but we do have one that doesn’t repeatedly appeal to bathroom humor and cheap, sappy plot devices. The word “smurf” is thrown around as a verb or adjective between every other word or two, and to the point where the viewer gets dizzy. It is through this medium that we get suggestiveness that will completely miss the younger ones and hit the older ones as they are used to create meaningless, mock-curses and phrases, like: “Who smurfed?”, “Smurf this!”, “Oh my smurf!”, etc. But I had to laugh with the standout-ishly creative: “I kissed a smurf and I liked it.”

Just watching the trailer, all signs pointed to this being a terrible movie, a cinematic disaster, and some will consider it so. And yet, it was strangely watchable with all of its immaturity and criticism-dodging nonsense.

The smurfs always have the momentum to climb anything they want, it seems. It’s like gravity only 1/4th applies to them. And the humans are as interested in the smurfs as if they were animals, just household pets. None of that matters when the plot races along like it does and widens your eyes with this much silly fun.

A great movie this is not, but the actors and voice actors seem very committed to their roles. They couldn’t have picked a better voice choice for Papa Smurf than Jonathan Winters. I wished we could have gotten to know more about Passive-aggressive Smurf, but now I’m just rambling.

Ever wondered how Smurfette came to be the only female smurf in a colony of males? The movie explains her origins, for which it has a modicum of my respect for doing something the TV series never bothered to do (that I can recall).