July 22, 2011
Movie Review: Winnie the Pooh (2011)
Summary: When Eyeore loses his tail, Winnie the Pooh and his friends hold a contest to get him a new one.
Spoilers: none 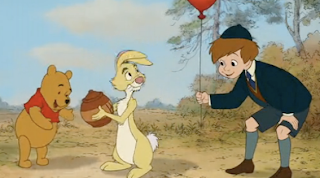 Disney brings us an all-new Winnie the Pooh, another movie based off of the books by A.A. Milne and the 1960s shorts. Some might remember the 1977 film The Many Adventures of Winnie the Pooh. That film, narrated by Sebastian Cabot and graced with a different round of voicers, doesn’t sound much different than this one.

Narrated by John Cleese, this story begins with a re-introduction to Christopher Robin (Jack Boulter, voice), the imaginative boy whose world of stuffed animals is one of great love, or perhaps outright infatuation.

As we gingerly travel into the realms of recreated classic Disney, we naturally wonder how this effort is going to be ruined for us, or else contaminated with plot devices for modern hyperactivity-cursed children filled with preservatives and dumbed down with ADD medication.

But alas, we have only a little to dread. This Winnie the Pooh is a masterfully artistic creation, and one with true focus on bringing back an old-style family treat that was Winnie and his friends. But not all of us are rejoicing.

We once again have “Pooh,” “Tigger” (both voiced by Jim Cummings), “Eeyore” (Bud Buckley), “Piglet” (Travis Oates), “Owl” (Craig Ferguson), “Kanga” (Kristen Anderson-Lopez), “Roo” (Wyatt Dean Hall), and “Rabbit” (Tom Kenny) who face two mysteries: the first is the inexplicable disappearance of Eeyore’s tail. The second is Christopher’s apparent abduction by something called a “Backson.” Then there’s Pooh himself whose stomach growls almost continuously because he can’t get his paws on any “hunny.” The sound of it made me hope someone would jump in and shoot a hiding alien that I hadn't noticed.

I’m proud to say that some of us grew up without being ensnared by Pooh, with his ostracism of proper spelling and his characteristic queerness. It’s always been hard for me to imagine how this character could ever motivate a child for the better. Something just didn’t feel right, not with or the gang pulling large thumb tacks out of Eeyore’s butt like a plug. *shutter*

It may speak past the kids, but I say, if a kid can become and remain interested through even the first half of this, it’s a stellar winner. But the film does have the decency to end at just over an hour.

Winnie the Pooh’s best quality is its ability to traverse in any given direction at any point into rhyming short songs that are as entreating as anything ever written by Dr. Suess. These show up rather frequently, which is a good thing, as they take my mind off of what I’m about to share.

If anyone acted like high-energy Tigger at their place of work, they’d get drug-tested that day. If they acted like this anywhere else, they’d get the police called on them and escorted out, or else asked where they got a hold of such good drugs.

Maybe I’ve just lost touch and am a calloused old shell nowadays, or maybe we’ve all forgotten how complex we can be in movies because of our assumptions that kids can’t follow any standard-length conversations anymore. But this was like a really remarkable high, a hippie’s cracked-out, living-room-trashing, unleashing of energy high. What else am I to make of this statement: “It’s a good thing I noticed it, otherwise, I wouldn’t have seen it.”

Yes, this does (finally) become a creative and intelligent meal for the mind, barring the strongly promoted illiteracy. Another thought I had while watching Tigger bounce around with a pan hat on: “Damn, he’d get ejected from a job interview so fast!” 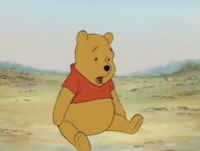 It’s too weird. You never quite know what they had in mind when making this, or really any other Pooh movie, but particularly this one. And no one can ever know the true reasons behind the conception of the lead character. The possible ulterior motives make me suspicious.

This confused trip has just one moral lesson, and it’s way at the end. Other than that, it has no point in being. Like chatting with an invalid on the way to getting their medication refilled, there is simply no point. The plus side of that is that we have no clichés to contend with, just a fat, effeminate bear who is starving for “hunny” and isn’t tough enough to storm the beehives and get it himself.

And think about it: Pooh is named after a nasty bodily process, he’s soft-spoken (too soft-spoken), uses fancy words like that oddly articulate man where you work who is always recounting some kind of personal crisis while filing stuff in the file cabinet. And Pooh is a glutton, not to mention rather inactive—not a role model for a kid whose father wants him to do well on the football team.

But to determine the real worth of this movie, we could always go with the “Could I imagine this entertaining me as a kid” test, in which case, this still teeters on the brink of failure.

I suppose I could never come to terms, despite its creative rhymes and cute songs and painstaking carefulness with the art (this, by itself, is superbly impressive), with the facts that Pooh and Eeyore are like two tired old people with no energy whatsoever (one needing “hunny” and both needing their medications refilled). Eeyore sounds like a tired, dying cancer patient.

And this is what we want our kids to want in the name of Nostalgia? Sleeping late, filling their bellies, getting “the shakes” while hallucinating about food, hanging around stupid friends who literally lose body parts? I just don’t get the appeal.