July 13, 2011
Movie Review: Monte Carlo (2011)
Summary: Two sisters and a friend are sent to Paris and wind up in Monte Carlo where they are led to assume the identity of a European celebrity icon.
Spoilers: none 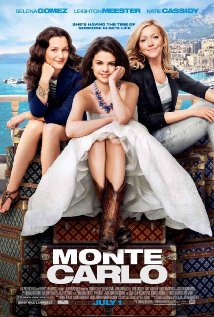 Three young girls – “Grace” (Gomez), “Meg” (Meester), and “Emma” (Cassidy) – travel to Paris where, through a string of bad experiences, they are led to Monte Carlo. They soon find their perceptions of the trip changing when Grace is mistaken for a famous British Heiress named “Cordelia Winthrop Scott.”

Cordelia is an exact replica of the younger “Grace,” but a lot more calloused, bad-natured, indifferent, and all-round meaner. Add to that, she was born with a silver spoon in her mouth. After traveling the country in Cordelia’s good fortune while managing to dodge the real girl, our proxy-privileged ladies will run into dashing young men who will show them more than just around some beautiful parts of Europe. They will provide experiences for each of the girls to learn about themselves.

On its merits, Monte Carlo is not a bad movie. It is more a film that falls beneath its potential to be a good movie. It gives its audience, consisting of younger men and women, just what they want. In so doing, it rests in its laurels and has forgotten all about reality by the end.

Watching the girls bumble their way around Paris, preparing to throw change off the Eiffel towel, and then missing the bus feels like a plot setup. And it is. Yes, we expected the type of movie where an unfortunate state of affairs gets turned into a life-changing experience, but we have that combined with pretty people taking each other’s breath away.

While being given a guided tour of Paris, the girls miss the bus and Meg runs into love…in the form of a magazine model-looking guy named “Riley” (Luke Bracey) who apparently chills and hangs out at the top of the Eiffel tower, a place he’s lived near his whole life. Well, something had to kick off the romance!

Back home, “Emma” has been going out with “Owen” (Cory Monteith), but the two hit a rough patch just before Emma leaves with her friends. She’ll come to find out just how much he values her companionship when she’s out of his life for a stretch of time. Grace is having the hardest time of all, pretending to be Cordelia while letting it out little by little that she likes “Theo” (Pierre Boulanger), a young man the real Cordelia would never so much as touch.

Have you ever noticed how it never rains sporadically in romance movies, only downpours? The same is true here. And American cell phones always work everywhere in Europe, but just plugging in the chargers literally cause explosions in foreign countries (like we saw in Leap Year).

And while these girls are giving each other subtle digs in what could well turn into cat-fights, we realize we have been touched with the soft-spoken charm of a chick-flick with at least some respect for the intelligence of other than the target audience.

Some will consider this worth seeing and seeing again, but it is little more than glamorized romance, as is the scenery, but that was the point. We can’t be too hard on a movie when its very goal is to make the viewer feel the exploratory joy of college-aged smooching in Paris—where men are evidently so sexually repressed that they fawn all over American women any chance they get.

When the girls are exposed towards the end of the film is where things really go off-rail. Plot logistics seem to fall flat when put next to the feel-good-y emotion of romantic comedy. Monte Carlo would have you believe that non-American cops can be swayed into dropping theft and identity theft charges simply because everyone in a room is happy. What a thought.

The relaxed pacing of the film is helped by what this film definitely has going for it: character development. These are not just dumb kids lost with limited pro-American visions of life. Well, they are, but the personalities are distinct, and throughout the film, the audience gets to know more about everyone. Even when what we expect happens, we don’t feel cheated or like we’ve wasted our time completely.

Then again, we’re not always wasting our time watching Disney specials, either. That’s what this film feels like, which means it can’t be said to cut it as a big-screen success.