July 11, 2011
Movie Review: Dawning (2009, DVD 2011)
Summary: A brother and sister visit their father and stepmother in a Minnesota cabin when tragedy strikes.
Spoilers: none 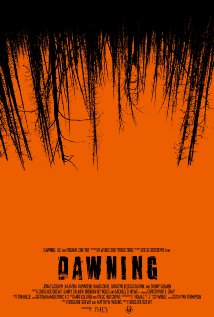 Dawning is an atmospherically charged, low-budget horror film that, despite some hang-ups in the storyline, reminds us of why we so love to be teased in our horror taste buds.

Well off the beaten path to civilization, in a cabin-home in the deep woods of northern Minnesota, a brother (“Chris,” Jonas Goslow) and a sister (“Aurora,” Najarra Townsend) arrive to visit their father (“Richard,” David Coral) and stepmother (“Laura,” Christine Kellogg-Darrin). After a long and wearying trip, they arrive, but the reuniting isn’t very warm or cordial.

The family has been through its share of drama in a rocky past, and neither Chris, nor Aurora have accepted “Laura” as anything but a self-preserving home-wrecker. After an already downhill night that starts out with pretension and awkward discourse, the conversation becomes one of safety.

With the mysterious death of the family dog, the intrusion of an apparently insane and mentally conflicted man (Daniel Jay Salmen) changes the subject to survival as the man warns of an evil force outside of the house. As tensions rise and discord and mistrust mount, the real cause of danger begins to slowly rear its head.

Dawning has much working for it. We want to look past its faults, such as a slow opening that lets our interest wane due to some overplayed family dynamics. The title, just like the ever-present elements of wind, darkness, and wood-ish isolation, are masterfully utilized and made to speak right to the heart of what we love in our horror movies.

And Dawning wants to be scary. It tries hard to elicit in us feelings of helplessness and loss of control, but the movie is so much of a tease that it never manages to make itself as hellishly memorable as it wishes to be. There is something unnervingly scary about the thought of losing control of our actions, but this does not play through very well for the fact that we already know as much early on about what we are dealing with as we ever will, and I’m convince this is what takes away much of the dread.

The film teases us by forcing us to wait and see who or what the real evil is in these dark and excluded woods surrounding this quaint and highly desirable cabin that we know we’d love to spend a night or two in. The problem with Dawning is that we never get to know much of anything else.

We never get to know who, what, or even why we are watching what we’re watching. We have no context in which to appreciate or explore ideas or ponder possible meanings or reasons behind what transpires. We’re just supposed to be enamored with the thought of unseen, pervasive evil, much like a 6th-grader trying to tell a horror story he just made up.

We’re not left to think; we’re just left to observe and be impressed with how convincing things look (and they do look mighty darn convincing). It would help a little if we could relate to the family with their mutually jaded feelings towards each other, but much of what they do is provide filler for what we are lacking: a story that works harder at forcing us to internalize the terror.

There are unexplained story elements that, aside from being unclear, don’t add much as cues to the terrors that follow. A person running in front of the headlights of a car is one such element, an element never explained or examined. Another is strange sounds coming from a telephone during a possession.

Dawning’s performances are stronger than your usual middle-ground accomplishments in low-budget films and offer up more good than bad. It is the case here that no single performance stands out. The ongoing and overplayed family drama keeps popping back up in conversations when heated decisions must be made, but this does little to ignite the story into ever taking us out of our comfort zones.

When one becomes aware of these problems, the work is a stone’s throw from feeling like a cheap manipulation. More of the same feelings come with a let-down ending that gives less than ample satisfaction or explanation.

This film has deservedly gone far in the film festivals and keeps the standard high for independent films, but will have some trouble catching and holding general audiences. But there is no question that director Gregg Holtgrewe can construct a solid movie with an upper-budget fit and feel to compete with the big-budget-ers.