June 09, 2011
Movie Review: Your Highness (2011)
Summary: When Prince Fabious’ bride is kidnapped, he goes on a quest to rescue her accompanied by his lazy, useless brother, Thadeous.
Spoilers: none 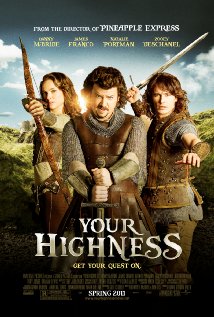 David Gordon Green, director of 2008’s Pineapple Express, brings us Your Highness, a medieval times parody in the style of Monte Python’s Holy Grail with the talents of James Franco, Natalie Portman, and Danny McBride.

When the accomplished and celebrated “Prince Fabious” (Franco) returns home from slaying a cyclops, his bride-to-be, “Belladona” (Zooey Deschanel) is kidnapped by the evil “Leezar” (Justin Theroux). In an attempt to reclaim her, Fabious takes along his lazy, incompetent, and loathsome playboy of a brother, “Thadeous” (McBride) who agrees to go or else be banished from the kingdom.

En route, Fabious and team meet “Isabel” (Portman) and they eventually set out together to defeat Leezar who plans to rob Belladona of her virginity on the stroke of midnight. One of the best performances in the film is on the part of “Julie” (Toby Jones) and McBride who, together with Portman, almost give this film a fighting chance at success.

This intentionally ridiculous film has some truly funny moments with some fine acting that does the movie a big favor in helping to save it from seeming overbearing with its harshly applied satirical level (which it sometimes still falls victim to).

With a well-deserved R-rating for near-constant sexual and homosexual references, body jokes, drug-use, and crude humor, the film does mange to lay down the groundwork for winning over adult audiences looking for a dirty good time, but can’t ever seem to make itself worth paying the price of a ticket. It feels like a feature romp on late-night UK cable television programming as opposed to a full-length feature film.

2 stars for the risqué romp, Your Highness—or should we say, judging by its quality, Lowness.