June 18, 2011
Movie Review: Green Lantern (2011)
Summary: A test pilot is granted a mystical green ring that bestows him with otherworldly powers, as well as membership into an intergalactic squadron tasked with keeping peace in the universe.
Spoilers: none 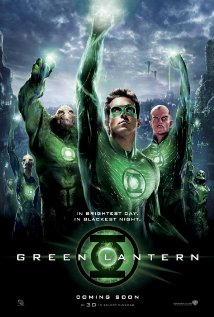 Green Lantern is the title of a series of DC comic superheroes created by Martin Nodell and Bill Finger in 1940.

In the series, immortal Guardians police the universe. These watchers create rings and lanterns to harness willpower, “the greatest force in the universe,” and anoint soldiers to defend the cosmos from the forces of evil, particularly fear. Each as Green Lanterns of their own sectors, these soldiers form the Green Lantern Corps.

One of their more memorable mortal enemies is Parallax, the demonic embodiment of yellow energy, and a menace that conquers by wielding a destructive, soul-consuming fear.

The movie takes off in what is referred to by fans as “The Silver Age” of the Green Lantern showcase, in which “Hal Jordan” (Ryan Reynolds), a pilot, is given the ring and lantern of a dying alien named “Abin Sur” (Temuera Morrison).

Upon discovering his cosmic-level superpowers and his chosen status as earth’s appointed Green Lantern, he comes in conflict with the evil scientist, “Hector Hammond” (Peter Sarsgaard) who operates under the influence of “Parallax” (Clancy Brown, voice), who prepares to consume the galaxy, and more readily, earth.

The movie’s version of Hal is a rules-breaking, boundary-pushing man who hasn’t found his mould yet. Carrying around a childhood trauma brought on by the loss of his father, Hal is fearful—fearful of commitment to his on-and-off girlfriend, “Carol Ferris” (Blake Lively) and fearful of continuing to fail at most everything he’s ever attempted in his life. In short, Hal is your flawed superhero who hasn’t found himself, and therefore, hasn’t reached his summit of potential as a man or a superhero.

The movie’s beaten-to-death theme is on conquering fear with the knowledge that doing so isn’t in the absence of fear, but despite it. And like many comic book movies that must begin with a condensed history lesson with use of vague terminology to set the stage for non-fans, this one gets more wrong than what the comic-geek fans would notice.

It is debatable whether or not this one should have even been attempted in a movie format; which is to say, it might better have stayed a comic book with under-pinnings like “green emerald energy of willpower” and “the yellow energy of fear.” Such talk doesn’t relate well to audiences no matter how impressive everything else looks.

And while we’re on the subject, why must some community set themselves up as “watchers of existence”? They exist for billionaires of years, but they aren’t very wise, or smart. A 30-year-old man can challenge their wisdom – and they even admit they don’t always stand united – and yet they see this objective need to rule like a panoply of undivided gods. Why?

There is some character definition behind Hal, but Parallax is just a “Satan’s right-hand man,” a high-ranking demon who is evil just because he’s damn evil and that’s all there is to it.

Hal looks back to when he was a child with pain in his heart at his father’s demise, but he doesn’t feel creeped out using the same phraseology his old man used, and with the same overly ambitious, fear-denying attitude that characterized him near the end of his life.

When granted powers from this alien ring and lantern, Hal has no problem believing he is “chosen” and that the ring can never make a mistake in choosing someone. Shortly thereafter, he goes to space and gets a goofy costume and talks with a fishlike alien with an English accent. He then attends a motivational speech on the need to defeat Parallax only moments after learning how and what he is and what he is supposed to stand for.

His trainers, like “Sinestro” (Mark Strong), have no problem belittling him for not immediately being a master-of-will-power warrior when he was, only moments earlier, catapulted into this crazy realization of being…hell…a virtual god!

Sarsgaard’s Hammond is laughable, literally. Every time I saw him, I wanted to laugh. He looked and felt like a comedian making fun of a scientist. He ruined what little credibility his part was supposed to have, but in this movie, I don’t think it matters too much.

Green Lantern is way too playful, but there isn’t much combat. We have a few sparing bouts, a helicopter crash at a party (very similar to the one we saw in Fantastic Four: Rise of the Silver Surfer, 2007), and willpower racetracks and Hal showing off his powers to a buddy and his squeeze. Not really much to be proud of, and what is offered is green, computer-contrived imagery that doesn’t impress.

Yet another piece of green wood to fuel the fire, Green Lantern is emotionally safe. It never presses to be moving or meaningful except when it’s beating to death is “conquering fear” premise. The only thing more hastily done than that is parts of the dialog that are often crammed, and in the context of what occurs, don’t sound natural or expected. Neither it, nor its romance has much heart. There’s just not much to like.