Another Reason Anniversaries are Special

June 22, 2011
Movie Review: The Anniversary at Shallow Creek (2010)
Summary: Six best friends gather at an uncle’s house for a weekend party unaware that they are targeted for execution.
Spoilers: none 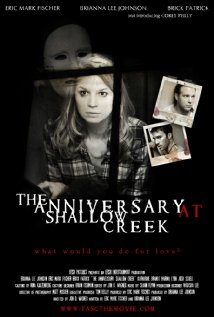 The Anniversary at Shallow Creek is a work of film noir, a horror/thriller directed by Jon D. Wagner and brought to you by Breaking Glass Pictures. It focuses on six best friends who get together at an uncle’s place in the mountains for a party, but are unaware that they have been targeted for execution.

The film starts off with a quote from Gilles de Rais (1404-1440), a soldier in the French army who became known as a prolific serial killer of the young. What begins with murder ends with murder in a movie that exists, it seems, solely to make appealing a morbid fascination with the taking of life.

We meet “Sam” (Eric Mark Fischer) and “Paige” (Brianna Lee Johnson) first. Wanting to get away and take a break from medical exams, the “just the two of us” getaway at uncle’s place becomes a six-er event when “Mike” (Josh Schell), “Lindsay” (Katharine Brandt), “Betsey” (Marina Lyon), and “Anthony” (Brick Patrick) express their interest in the trip.

As uncle is out of town, these kids have the place all to themselves. Now all that’s missing is the beer. Once they arrive, they meet an 11-year-old boy named “Corey” (Corey Reilly) who, strangely, appears to be unsupervised by his older sister. He decides to tag along with these none-too-concerned partiers who, even more strangely, don’t mind.

Their complacency quickly gives way to panic when the group realizes they are targets at the end of a sniper’s wicked-accurate rifle. How convenient considering Sam’s uncle was a sniper! This we have dropped from the mouth of a nosy storekeeper (Jeff Perry) who suggests for us that the war took what was left of dear ‘ole uncle’s sanity. And from there, we have no more input, just a picking off of kids with a precision instrument of death aimed at clueless young people wondering who and why.

True horror admirers have much to love in this succulent and sultry glorification of the power trip behind serial slaughtering. The problem is only in getting there. The film’s first half is beset with problems. We have friends looking to get away, and of course, drink beer and have sex (automatic recipe for horror, no?)

It appears director Wagner needs some work on how to skip the stage-setting small talk and non-essentials to make room for the bigger moments. The audience is subjected to more than 30-minutes of the kids’ planning, arriving, complimenting the place, and proudly walking around impressed, with beers in hand.

Then we get more kissing, more beer comments, some weak humor, “girl-prissing” in front of a mirror, and girls chatting. The lines sound canned and there is little by way of effective build-up leading to what comes next. But it is the second half of this 90-minute gore-revelry that steals our hearts back.

I say what I must of the opening, but Shallow Creek is far from shallow, and its strengths are not red-colored cosmetics. The memorable story is all about giving the noir-addicts exactly what they want most, but this is accomplished in a story-rich application that will elate viewers in an ending that would and should make the majority of horror films out there jealous.

The Anniversary at Shallow Creek is stocked with some good performances, but more notably are the performances by “Melissa” (Pia Ponwall) and “Jim” (Jay Laisne) who provide us with a provocative depth and intensity not seen in the other characters.

Simultaneous horrifying and fascinating, I was pleasantly reminded of just how strongly I can root for the antagonist—and I did so without just understanding the mindset, but actually aspired to join in on the hunt!