I'm Ready to Give it Back

May 23, 2011
Movie Review: Something Borrowed (2011)
Summary: A best friend falls in love with her best friend’s fiance.
Spoilers: none 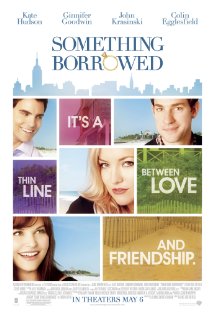 Something Borrowed is not so much a bad romance movie as it is a mishandled one.
As a romance, it is unmistakable in its intention to offer audiences something they want and can relate to for everyone who has ever had a regrettable fling with a best friend’s lover or has known friends who have crossed that easily stepped-over line.
Ginnifer Goodwin is “Rachel,” a law student-made-lawyer at NYU and former study-buddy of “Dex” (Colin Egglesfield) who is introduced to Rachel’s best friend, “Darcy” (Kate Hudson). The two become engaged. Having beers years later, expressing untold regrets of the past, Rachel and Dex have an affair, which leads to awkwardness in their relationships and their close circle of friends as they hang out and help plan Dex and Darcy’s wedding.
This circle of friends contributes much to the disastrous mishandling of the movie’s material. Rachel’s best-friend-since-childhood Darcy could have gotten a thumbs-up, but is victimized by bad writing. She’s portrayed as such a bimbo that she must be grammatically corrected often and has an IQ probably just a tad higher than a mentally disabled 7th-grader. In addition to being superficial, she’s a chronic liar who peddles falsehoods to feel more dominant and confident.
“Marcus” (Steve Howey) is such a lie-telling jerk-off who roams the bars hoping to get lucky that he hits every clichéd note while making “unlikable” his middle name. Every circle of friends in the world has a version of him, the classic lounge lizard who can barely spell words like “faithfulness” or “fidelity,” but can carry on with a beer in hand and tell sympathy stories about how he nursed a squirrel with a broken foot back to health.
Rachel has a close confidant, a male friend named “Ethan” (John Krasinski) from whom she keeps few secrets. Ethan pretends to be gay to avoid having an interest taken in him by “Claire” (Ashley Williams), who is obnoxious and clueless – and like Darcy, quite stupid – enough so to think she can straighten out a professed gay man with her affectionate wiles.
In a movie filled to the rim with catastrophically dishonest characters and misguided attempts at being relatable, Ethan is the glue that comes closest to keeping this ship of doomed-from-the-start romances afloat. His passion and anger and the gravity with which he handles his supporting role as a near “full disclosure” truth-teller and true friend to Rachel keeps the film from sinking deeper into the sea of failure than it has.
These very limited characters each face a number of problems—only the first of which is that the film’s humor bombs because it insults the intelligence of the audience. No one acts as stupid as this crowd, but the acting is reckless on the part of all but Krasinski. Movies tend to suck when no one takes their roles seriously.
This joke-laden, soap opera-style take on romance with New York cab rides, weekend getaways, friends pretending to be gay, liars, and spontaneous expressions of untold feelings is “old hat” material, and of course, is made worse by the fact that the audience is forced to watch and wait as Rachel’s and Dex’s love stays concealed with both Dex and Rachel each looking for opportunities to break the news, but either choosing not to or else not having the guts.
Dex’s parents are another bad element in the mix. Dex’s dad (Geoff Pierson) puts pressure on his son to marry someone he’s clearly not in love with simply because the rich and powerful must, of necessity, be assholes who squash the life out of budding, unapproved romances. Father and son talks don’t sound like theirs do. And that’s the disappointing part—the contrived-but-familiar theme of best friends falling in love with their friend’s lover could still be appreciated were it not for these shortcomings.
And Something Borrowed fails yet again in that love relationships in bad romance movies are always less complicated than in real life. You can feel the lack of a connection. You wonder how Darcy and Dex ever had anything in common or ever felt anything between each other to begin with. And as usual, the circumstances make telling the truth a drawn out ordeal.
Yet another drawback is that the writers and director never even had enough faith in audiences to be smart enough to pick up on plot clues, body language, or simple deductions in reasoning, such as that those who lie to bolster their self-image are not happy people. The writers can’t assume you’ll notice it, so they must make the film 20 minutes longer to explain that to the audience. As a result, the movie feels long, despite a valid message about best friend cross-romances and relationships built on lies. That’s the only area where the film takes on any complexity at all.
(JH)
Grade: D+ (1 ½ stars)
Rated: PG (for sexual content including dialogue, and some drug material)
Director: Luke Greenfield
Starring: “Rachel” (Ginnifer Goodwin), “Darcy” (Kate Hudson), “Dex” (Colin Egglesfield), “Ethan” (John Krasinski), “Marcus” (Steve Howey), “Claire” (Ashley Williams), “Dexter Thaler Sr.” (Geoff Pierson), “Bridget Thaler” (Jill Eikenberry), “Claire” (Ashley Williams)
Genre: Comedy / Drama / Romance
Trailer