Objects in Mirror Are Closer Than They Appear

April 21, 2011
Movie Review: The Lincoln Lawyer (2011)
Summary: A lawyer conducts business from the back of his Lincoln town car while representing a high-profile client in Beverly Hills.
Spoilers: none 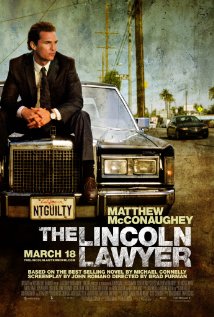 Based off of the novel by Michael Connelly entitled The Lincoln Lawyer, we have the movie adaptation of the story of “Mick Haller” (Matthew McConaughey), a hotshot California defense attorney who spends most of his time working from the back seat of his old-model Lincoln Town Car.

In Beverly Hills, Haller is famous for three things—his high prices, his high-profile clients, and his ability to make the criminal cases against his clients go away. Haller’s best friend and investigator, “Frank Levin” (William H. Macy) and his dependable chauffeur, “Earl” (Laurence Mason) are valued parts of his team.

Marisa Tomei is “Maggie McPherson,” a D.A. and representative for the state. Haller and McPherson have a past and a young daughter together, but aside from the occasional hook-up, only unite for an exchange of favors on cases and some off-the-clock good times.

When presented with the case of “Louis Roulet” (Ryan Phillippe), a young man accused of attempting to kill and rape a prostitute, Haller will uncover a pile of evidence that will put him in touch with one of his prior cases where a man named “Jesus Martinez” (Michael Pena) was accused of murder.

In his quest to get Roulet acquitted, Haller must take on lead prosecutor “Josh Lucas” (Ted Minton), which becomes progressively difficult when Haller discovers that the state has the deck stacked against him by way of evidence, adding to the worrisome fact that his rich, privileged client has been less than forthcoming.

Haller is also at odds with “Detective Lankford” (Bryan Cranston) who sees big-time lawyers like Haller as menaces who shouldn’t be able to sleep at nights. With a network of supporters representing the defense and the prosecution, the audience is to understand that our painfully imperfect system – flawed as it may be – only works when its agents take their respective sides and battle it out. That is how justice is served. But what has never been a problem for Haller suddenly becomes one, when for the first time in his luminous career, he finds himself questioning which side he is on.

The Lincoln Lawyer is a well-written movie about the legal system. The film entertains not because of its novelty or good writing, but because of its uneven, drama-clustered story. What the film does not do is separate itself from so many other films in the genre that end up in the courtrooms, where the prodigious defense attorney grows a conscience after years of getting criminals acquitted, or else finds out that his “innocent” client has a dark past.

There really are no hidden messages here or themes beyond the intricacies of the plot. Money exchanges hands, evidence is viewed and reviewed, and the legal system grinds its gears in trying to administer what we want to call justice. Courtroom politics and the back-and-forth of the legal system are the main attractions in a movie where not all of the characters have as much dimension as they could or should have.

But The Lincoln Lawyer is a respectable film, one that takes its audience well inside two cases of murder and attempted murder as a powerful family fights to keep their son out of prison while his lawyer struggles with the fact that he is having a hard time believing in anyone’s innocence anymore, and coming to terms with how this has affected his judgment.

Movies that end up in the courtroom have a strange way of getting back to the moral outlook of the main character. This one is no exception, but in a world of supposedly blind legal impartiality, how are we all reaching out for favors? How can we keep true to our principles as Haller appears to be so good at doing?

Every movie about crime and criminals have some gripe about the system (they would or else they would never have been made), but the only gripe I have is how a work like this can score so many points and yet still fail to reach its potential.

This isn’t the first time McConaughey has charmed audiences as a high-powered defense attorney, and I suspect it won’t be the last. But it isn’t his finest, either. The pacing of the story is our only real problem. It isn’t until the movie ends that the strung-out plot is finally wound down and loose ends tied up. As a result, it feels a little forced.