Not for the Birds

April 25, 2011
Movie Review: Rio (2011)
Summary: A domesticated macaw from Minnesota meets the fiercely independent Jewel, as the two take off on an adventure in Rio de Janeiro.
Spoilers: none 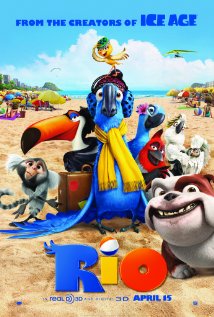 Animated movies have changed so much in recent years that it is difficult to compare them to their predecessors of decades ago. Today, they are faster-paced, with better animation, but also lacking in creativity when compared to the classics most of us grew up with.

Earlier childrens’ films were made with the emphasis on the story as done in the making of non-childrens’ movies. The modern day counterparts fight harder than necessary to work within the short attention spans of their less than mature audience members. While this tendency does not heavily count against a film as to its worth or lack thereof, we should take note of the exceptions, of which Rio is one.

Not far out from a movie released about an ant named Rango, we get a movie named Rio, a film about an abducted bird-turned-agoraphobic named “Blu” (Jesse Eisenberg, voice), who is found, taken in, and raised by “Linda” (Leslie Mann, voice), his handler, who is just as cautious and un-ambitious as he is.

Enjoying cozy lives in a frosty-windowed bookstore in Minnesota, the two are approached by “Tulio” (Rodrigo Santoro, voice), an animal doctor who offers them a chance to repopulate Blu’s dying species by mating him with another Blue Macaw—the only other bird like him left in the world. Reluctantly, Linda agrees and the two are brought to Brazil, to Rio de Janeiro, where Blu soon meets a feisty and flighty bird named “Jewel” (Anne Hathaway, voice).

What seems to be a pleasant and social experience for bird and owner only “goes south” when Blu and Jewel are abducted by smugglers to be sold for profit. Escaping with a stroke of luck, the birds find themselves fleeing from captors and seeking to get home. But Blue and Jewel aren't looking for the same home.

Blu and Jewel’s combative beginnings are mainly the result of wanting different things. Jewel wants to be reunited with the wild. Blu longs for the comforts of brisk and cold Moose Lake, Minnesota. In route to get to their destinations, they will run into characters like a Toucan named “Rafael” (George Lopez, voice) and a bold, slobbery, and sometimes-scary bulldog named “Luiz” (Tracy Morgan, voice).

Opening with a musical, we are immediately hooked with what are common in animal-centric films—evil abductor humans. Short but clever (and always culturally fitting) music mix-ups and some passionate voice-acting does little for the fact that our lead character Blu has no personality. His bookworm-slanted handler goes a little further towards being relatable, but it’s the supporting cast that must come to the aid here.

Improvements aren’t made without two birds and a host of comically inept villains, and a Canadian goose named “Chloe” (Wanda Sykes, voice). But it’s not the good bird who is the shining star of this show, but the bad bird in the unrivaled personality of the show's anti-star named “Nigel” (Jemaine Clement), an irresistibly charming Sulphur-crested Cockatoo who turned to the dark side to help his handler and kingpin smuggler, “Armando” (Davi Vieira, voice).

The verbal exchanges are filled with little ice-breakers that are supposed to generate laughter, but often fail in that endeavor, due mostly to predictable let-downs and follow-ups scattered throughout the film in the name of comedy. What Rio offers up as working comedy will not be as much as will be expected.

While not spectacular, Rio does its best work by just telling its story and letting the chips fall where they may. I would like to have seen more musicals and fewer attempts to hit the high marks with crammed-in comic relief, but the movie does get better going in, earning forgiveness for its occasionally silly slips.

The director of the Ice Age series brings us Rio, a film that will slowly win over its audience with small portions of humor, some worthy adventure, a well-served-up animated Rio de Janeiro, and some hip-hop-ishly abbreviated musicals that, in the finality, make a pretty good movie.