Madea’s Not Wearing a Bra 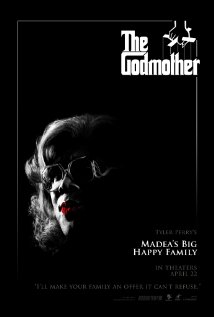 After getting some bad news from the doctor, “Shirley” searches for a way to re-unite the family, and in the process, bring them into the know about her rapidly failing health. But things aren’t easily coming together for the Simmons family.

“Byron” (Shaw “Bow Wow” Moss) has been in prison, and when released, is tempted to return to a life of selling drugs. “Kimberly” (Shannon Kane) is having anger issues and marital troubles, as is “Tammy” (Natalie Desselle) who is struggling to control her two rebellious boys.

As family tensions grow and the “dirty laundry” of past mistakes and family secrets begin to tear things apart, a temperamental “Madea” (Tyler Perry) and “Aunt Bam” (Cassi Davis) must step in and take charge.

This addition to the Madea series certainly has its highs and lows, but the lows come first. It goes longer times between the big laughs and just isn’t blessed with as smart a script as past movies. This is amplified by the film’s tendency to rely too heavily on flipping back and forth between heated family dynamics, the weirdness of its characters, and social awkwardness to sell its unique brand of comedy.

The usual cutaways between family dramas at home on the one hand and Madea’s comical unleashing of frustrations in public on the other is phased out, with attention given to the family instead. While Big Happy Family does occasionally still hit the high notes for good comedy, it doesn’t happen quite often enough.

And though the acting works, the audience may not be able to help but notice a number of scenes that needed to be cut, where cast members are laughing, looking off, or else not into their parts. This is especially noticeable since director Tyler Perry has come to be known for his fine attention to detail in his stories that so well mix black comedy and drama.

As a family laugh-along remotely in the style of Sanford and Son, the movie begins to gain ground some 30 minutes inward, but until then, is barely passable. Two stars for the ghetto-fied but functional, Big Happy Family.