April 27, 2011
Movie Review: Hanna (2011)
Summary: A 16-year-old who was raised by her father to be the perfect assassin is dispatched on a mission across Europe, tracked by a ruthless intelligence agent and her operatives.
Spoilers: none 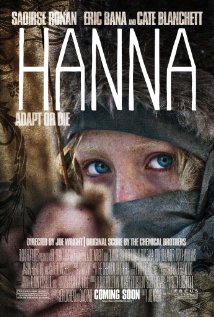 Hanna is the story of a 16-year-old girl, “Hanna” (Saoirse Ronan) who, through the top-level training received from her father since she was a small child, has become a near-perfect assassin.

Trained by an accomplished daddy, “Erik Heller” (Eric Bana), a defunct CIA operative wanted by the government, Heller has slipped off the radar for a number of years in the forests of Finland, but is thrust back onto it through his daughter’s acceptance of a mission to be completed with him.

Having raised his offspring to become an elite killing machine, young Hanna’s childhood is not like that of your typical young girl’s. She speaks multiple languages fluently, knows how to hunt and kill with better precision than an Aztec hunter, and is comfortable surviving in the wild in stone-age conditions. But Hanna has another advantage and it has to do with that always-fun bag of tricks in movies known as genetic modification before birth. This gives her virtually unmatched strength, speed, and heightened senses.

But I thought 16-year-old girls are supposed to be text-speak junkies, going from boy crush to boy crush, disobeying their parents by posting on Facebook for too long. And we could just stop here because you virtually know already that the movie is going to work based on that alone—so innocent, so small, so un-intimidating, and yet so deadly…who can not like that about an assassin movie?

Father and daughter working together, their mission brings CIA operative, “Marissa” (Kate Blanchett) into the picture, who is harboring dark secrets of her own. In Hanna’s undertaking of a mission involving deadly secrets and kill-worthy classified information, Hanna finds herself in a fight not merely to survive and infiltrate, but to discover her own past.

The movie Hanna is a push of primal exhilaration—and one could almost say, a film of substantial cathartic value. Staying true to the old-time-y ninja movies where a master spends years preparing his pupil for the unexpected, Hanna is like a retreat to more exciting times in action-thrillers where martial arts played a huge role. The difference is that here we have no muddying of the plot with pajama-like costumes and obtuse weaponry that would just never replace a good gun. Better grappling skills, weight manipulation, and being a good shot matter just as much – nay, even more – like in the real world.

Blanchett’s role as a formidable internal operative with a hidden past of her own is the only eyebrow-raising character that makes us question her role just because of the venomous disposition. She looks and feels like a sharp, high-clearance-wielding agent, but also a witch in a glib but narrow portrayal of the classic villain, not so much directed by rational motives as by child’s storybook motives of “wickedness,” which are intended to make and keep the antagonist bad enough to be thoroughly hated to power the movie machine.

Hanna wants to break out and know the joys of music and what it is like to have a normal life. As the film progresses, audiences are led to struggle with the thrusting suggestion that perhaps father has not been as honest with his daughter as we assumed. But while the story stays meaningful, the outplaying doesn’t always carry the intended emotional gravity it sought to obtain. But that’s being a bit harsh.

Hanna is a fairly effective action-thriller, though it bogs down at various intervals around the middle of the film where she comes in contact with a family of five traveling across Europe. Here, we come to see Hanna’s softer side as she befriends “Sophie” (Jessica Barden).

The film never even tries to run in new directions with its plot, but it doesn’t exactly need to, either. Hanna is the young, female version of Jason Bourne, but with a few significant physical modifications, who is trying to find out more about herself. We appreciate it on the merits of its coolness, and not too much else—except, of course, for the beady, piercing, innocent eyes of the film’s young star.