March 03, 2011
Movie Review: Bleading Lady (2011)
Summary: An obsessed chauffeur terrorizes a celebrity’s cast of co-workers before becoming a threat to her.
Spoilers: none 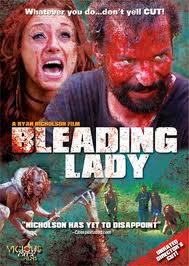 Bleading Lady (Star Vehicle, as it is known at IMDB) is an example of the type of independent film that gives others of its kind an out-of-the-box perception for sucking. There is no other way of saying it, nor should there be.

But in this case, the movie does actually suck, but on purpose and without apology. It’s as though the creator was trying to weed out the “unfaithful” viewers who wouldn’t appreciate a cult classic in the form of a hilariously bad throwback.

As is suggested in watching the trailer, Bleading Lady is so bad that it can’t even be made to look good in advertising. Most will not be prepared for it, despite my giving you a warning. One must dig deep for the right words to express its suckiness, and yet director/producer Ryan Nicholson, creator of the likes of Gutterballs (2008), Hell Hath No Fury (2006), and Live Feed (2006) is content to go for the gross again in a low-budget work that couldn’t be upstaged in bloodshed if you literally poured a 55-gallon drum of the fake red stuff on the floor right in front of you.

This 76-minute exercise in mess making is not of the unwatchable persuasion, however, but will prove shamelessly entertaining for the right audience. The movie focuses on a man named “Don Cardini” (Dan Ellis), a chauffeur and self-professed movie buff who looks like former SNL comedian Sean McDonald when he plays his egotistically exaggerated Burt Reynolds.

Don comes to provide transportation for “Reversa Red” (Sindy Faraguna), a breast baring “scream queen” and low-budget film sensation, who happens to be a long-time obsession of Don’s. And like all respectable film psychopaths, Don has issues, the kind that no doubt began at home, but put him at odds later in life with everyone around him, including a young film director named “Luke” (Nathan Durec), a fellow chauffeur, “Frankie” (Mike Li), and a quiet pushover of a boy (Nick Windebank) waiting around at the Forest Grove Lodge.

This Don can safely be called a bad guy. It doesn’t take but a couple of wrong words from anyone to send him into a violent fit of rage at any given time. It’s amazing, in fact, that the character wasn’t institutionalized long before the movie began, barring it from being made—almost as amazing as how he manages to again and again rattle off lines to the dismay of the audience that sound like responses from a street punk in an outtake from Charles Bronson’s Death Wish series.

Giving her rides to and from the set of her latest movie gig, Don learns that Reversa has a stalker, which leads to his becoming yet more paranoid and insanely protective of her. From there, his insanity drives him into a homicidally violent rampage aimed at everyone she works with (which is everyone), before his deeply-rooted psychosis begins to filter back to her, the object of his admiration.

What at first glance appears to have nothing worth admiring begins to earn itself some respect. Unlike so many other low-budgeters with a destiny to do nothing but ride along unnoticed in a sea of 4 am-worthy viewing materials, Bleading Lady parts ways in that it accomplishes what it sets out to do in aiming high in its cult classic ambitions. No need to remind us that the jury is still out. This one is destined for cult classic greatness!

It follows suit in style to some of Nicholson’s other films, but is locked and loaded with undertones of satire towards things like the 1980s, bimbos, pompous Hollywood figures, film psychopaths, mindlessly bloody horror flicks, and low budget films themselves.

The dialog is so bad that it rivals the imagination even by bad movie standards. You couldn’t tell the background music apart from some no-name piece of synthesized crap keyboard solo from a failed 1987 boy band audition if your life depended on it.

There is no doubt that this fresh cast of newbies had to pull back on whatever talent they had to offer in order to gurgle out only artificial screams while articulating the words “What the fuck?” numerous times, just before being unconvincingly gutted by our lead man who swings that knife in such a way that it appears he’s just getting a good arm workout stabbing a Styrofoam prop before filming.

But it is precisely because of the inclusion of these excesses that Bleading Lady is what it is: an enigma of the “so bad it’s good” persuasion. Some might even call it brilliant, but it’s kept from being called a flop because of its cornball exploitation of personalities and themes, and because of its plot that could have been taken in so many other directions, and with leagues of credibility had the goal been different. But the film acts as a feedback loop, tossing credibility to the side, and tossing back the viewer’s way an almost welcomed-if-unexpected parody of the gory pop culture nonsense that has come to define the horror genre today.

Oddly void of psychological depth or intensity, this one is also void of drama, and void of intensity until its end. But by then, you won’t have any difficulty understanding why. A calculating and sly deception brings in a nod-worthy premise that puts method to the madness.

I haven’t laughed so hard since Troll 2. The film is it’s own self-parody, a tribute for and against the low-budget side of a genre that has long deserved such beautiful derision. Defying classification, it will attract a few and repel many.