March 29, 2011
Movie Review: Sucker Punch (2011)
Summary: A young girl is institutionalized by her abusive stepfather and retreats into a fantasy world as she plans an escape.
Spoilers: none 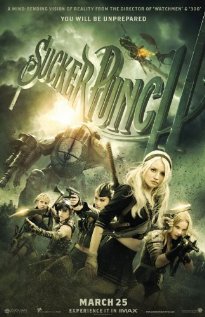 What we have in Sucker Punch is an emaciated, practically non-existent story which serves as nothing more than the framework for preteen titillation and art geek masturbation. The flimsy plot that is supposed to hook us is of “Baby Doll” (yes, that’s the name we have for her in the film), a girl sent to a mental institution by her abusive stepfather for trying to stop his misconduct.
Baby Doll arrives at the institution, and this is where the real fun – uh, I mean, travesty – begins. This asylum is an odd one for sure; you arrive with the place looking so dark and dirty. There’s a creepy cook (Malcolm Scott) with a staring problem and a “you’re supposed to hate me!” look written all over his face. And there’s the warden, “Blue Jones” (Oscar Isaac) who could play a mobster better than has yet been done in film, but doesn’t act at all like someone in charge of mental patients should act.
But we’re still not done with the hospital yet; these girls are not cared for; they’re dolled up and made to dance and put on shows and otherwise satisfy the needs of gentlemen from the local establishment, including the mayor (Alan C. Peterson). Parts of the institution are oddly clean and accessible for the public to see these shows without that unsightly stuff like, you know, screaming patients in straightjackets and twitchy people standing in the corners and talking to themselves.
These girls are so pretty, so thin, so cute. Not a chubby or plump one among them. We get no self-mutilating, gaunt, or malnourished abusers of body parts, nothing like you’d find in a real mental institution. These are the perfect examples of damsels in distress, the kind that have things like “you’re hot!” yelled at them from an audience of socially inept computer geeks, or else they’d get whistled at by construction workers. These girls even call each other by seductive stripper stage names, on and off stage.
So now we’re done with the facility. We move onto – or back to – the warden. Blue is so over-the-top with his evil merchandising of the girls that quite practically everything in the film is ruined with just him. Without showing the slightest sense accountability, any girls that persist in refusing to dance or perform or try to escape are shot in the head—not outside, but right in front of everyone in dressing rooms where the blood-spatter can lie around and wait to be swabbed up by the police as evidence.
This unwholesome environment drives Baby Doll and four other girls, “Amber” (Jamie Chung), “Blondie” (Vanessa Hudgens), “Rocket” (Jena Malone), and “Sweet Pea” (Abbie Cornish) to devise an escape plan. To summon the drive to pull it off, Baby Doll fantasizes about obtaining the necessary items to escape...a map, a key, a knife, etc. This is where we, the audience, are taken into our own “mental institution” of aberrational computer art insanity inside Baby Doll’s head.
There, without any training, she fights with a samurai sword against 20-foot-tall cyborgs with samurai hats and red eyes, laser machine gun robots, and World War II era, suit-wearing, ork-like creatures of one kind or another, followed by dragons and attack robots ready to be hacked to bits by her and her team whose hearts are set on victory.
But audiences won’t feel like they’ve been victorious in selecting a good movie to spend their money on because this ridiculously under-thought story is such a weak excuse to sit through and wait for the action that it’s almost painful. Not supported by its deficient plot, the encounters are meaningless, and it doesn’t matter if these “enemies” in Baby Doll’s head get killed or not because they aren’t real.
Seeing these girls work their way to escape – sneaking around with the aid of seductive lure and thwarting some rape attempts from that nasty cook – is a mixture of eroticism, frustration, and believe it or not, boredom. No part of it hits us in any positive way. It’s not even an inspirational tale. But the eroticism on our list is supposed to be intentional—that is, if we are to believe director Zack Snyder’s own words in an interview about his movie wherein he states that it is to serve as a slap against the sexually hung-up geeks who would be attracted it. There are a few verbal clues in the movie that seem to back up his claim.
I suppose it makes sense that Snyder wants to have his cake and eat it too; why not offer a film to attract the preteens and socially maladjusted gamer geeks (and other chronic masturbators) and give them plenty of what they want, but then turn around and claim to others who are repulsed by it that it is a rancorous project with the intent of parodying the target audience? Makes sense; that way, love it or hate it, the viewer just fills in the blanks!
If this is a parody, it’s an application of Poe’s Law, which hardly wins this effort any brownie points. I’m sorry, but the mere thought of showing off these “look what I can do!” special affects and pretty girls and then knowing that some 15-year-old somewhere is just now learning what it means to jizz all over his bed sheets because of this film is too disturbing to think about.
(JH)
Grade: D+ (1 ½ stars)
Rated: PG-13 (for thematic material involving sexuality, violence and combat sequences, and for language)
Director: Zack Snyder
Starring: “Baby Doll” (Emily Browning), “Sweet Pea” (Abbie Cornish), “Rocket” (Jena Malone), “Blondie” (Vanessa Hudgens), “Amber” (Jamie Chung) “Dr. Vera Gorski” (Carla Gugino), “Blue Jones” (Oscar Isaac), “Wise Man” (Scott Glenn), “Stepfather” (Gerard Plunkett), “The Cook” (Malcolm Scott)
Genre: Action / Fantasy / Thriller
Trailer