A Mind is a Terrible Thing to Taste

March 15, 2011
Movie Review: Brain Dead (2007/DVD 2011)
Summary: Six people are caught in a deserted fishing lodge with a host of alien-infected, mutant zombies at their doorstep.
Spoilers: none 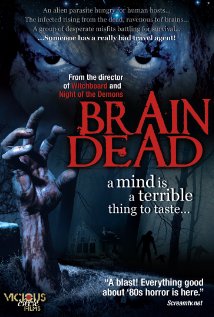 Kevin S. Tenney, the well-known 80s/90s horror film director who gave us the likes of Witchboard (1986), brings us his brand new work, Brain Dead. The newest one doesn’t even try to be much different than his older ones, consisting of sleazy, porn-ridden gore. The title of this article is the film’s way cool tag-line, but I’m guessing the brain-eating zombies might beg to differ with its message.

The story is of six unfortunate people who coincidently meet at a fishing cabin near a river where they must work together to stay alive from human hosts taken over by a parasitic alien organism that fell to earth as a meteorite to feed on brains.

This nudity-graced, low-budget horror wears its badge proudly as being the product of someone who truly knows the horror genre and wants to give his audience exactly what they came to see--nudity on the outside and human guts being relocated there by our token zombies.

We start off in a small town with a “podunk” police force transporting two criminals. One is “Bob” (David Crane) who is handcuffed to “Clarence” (Joshua Benton). When the van pops a tire and the officer driving gets out to change it, he is ransacked by Bob and the two escape.

Making their way to an abandoned fishing cabin, they soon meet “Sherry” (Sarah Grant Brendecke) (who, along with Benton, is the star of the show) who loves to “commune with nature” by swimming in the nude, and a man-despising-but-seductive lesbian, “Claudia” (Michelle Tomlinson) who more than makes up for her grumpiness by giving us a memorable skin-shot with a dip in the river accompanying her friend.

Joining them at the cabin is “Reverend Farnsworth” (Andy Forest), a minister with a “calling” for the breasts of his well-titted, young companion, “Amy Smoots” (Cristina Tiberia), who happens not to be his wife.

Unbeknownst to the group, the asteroid-morphing parasite has already begun turning ordinary humans into super-strong brain-eaters who possess a ravenous desire for gouging out eyes and going to incredibly intelligent lengths (for zombies) to rip out brains and feed on them.

Despite its low budget, the affects are doing well. At no point does the setting feel cheap, nor do the gore affects, which are generously applied (neck and upward mainly). The film’s pacing carries itself well without bogging down for the entire 95-minute runtime, which is due in part to these propped-up characters that only serve to be taken advantage of in a movie where the intertwining humor and horror are to converge into one focal point, and nothing is to be taken seriously.

The major deduction is for dialog that incorporates verbally incendiary remarks like: “Shut the fuck up!” and other exclamations used over and over amidst pointless exchanges that do nothing to augment the intended high-tension humor. These and other verbally lame comebacks, retorts, and jokes occupy so much film time that they are hard to ignore and cannot be covered up by the film’s mildly aggressive humorous current that started out on the right note.

The sleaze and gorehounds out there will be mighty happy with what has been proven to sell and what this film has, which is naked chicks and plenty of gore.