February 18, 2011
Documentary Review: The Warriors of Quigang: A Chinese Village Fights Back (2010)
Summary: A Chinese village fights back against water and air pollution that threatens to destroy their home.
Spoilers: NA 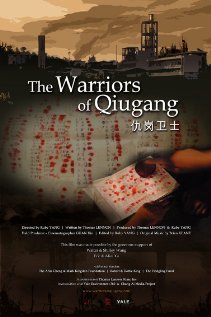 The title sounds like an epic martial arts movie about a city of lowly-but-deadly-with-their-hands peasants who use Kung Fu to fight off the cruel minions of a ruthless warlord as the hero prepares to face the last bad guy against whom he’ll square off in grueling hand-to-hand combat before walking away victoriously.

But things are a little different. These warriors are warriors in another sense. Our hero is Zhang Gongli, the spokesman and representative for the nearly 1900 residents of a small Chinese village called Quigang in the Anhui Province of China.

In the heavily industrious heartland of China, Gongli and his fellow residents are at war with the pesticide, dye, and chemical companies that since 1970 have been polluting their water and air, turning their rivers black with sludge and the air dense with the eye-burning smog of evaporating poisons.

As the body count of residents grows due to the rise of various forms of cancer and other sicknesses, Gongli finds the strength to keep fighting the good fight to right the wrongs of the Jiucailuo Chemical plant and the large, deep-pocketed enterprises that back it up. The story of the citizens of Quigang is made all the more interesting in that their struggle is in a communist country where being outspoken can bring a lot of trouble.

As he marches on, Gongli is seen as both a troublemaker and a hero, in his tireless efforts of filing paperwork to move forward with lawsuits and to raise awareness of the problem with the invaluable help of the environmentalist group, Green Anhui.

On the very difficult road to making progress is stalling and stark resistance, and even violence, brought on by corporate thugs. But these determined citizens truck on, using every legal means at their disposal.

In this 39-minute documentary with English subtitles, Chinese-American filmmaker and director Ruby Yang – with cinematographer Guan Xin and writer/collaborator Thomas Lennon – we are given a look into the last three years of an uphill battle fought by citizens of a city who weren’t even looking for a fight. It's as touching as it is brave.