The Bald and the Destructive

February 04, 2011
Movie Review: The Mechanic (2011)
Summary: An elite hit man teaches his trade to an apprentice who has a connection to one of his previous victims.
Spoilers: none 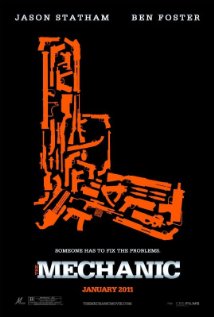 The Mechanic, starring Jason Statham as an elite assassin doing the “dirty work” of the powers that be, is proof yet again that bald bad boys are good in Hollywood when accompanied by even balder shoulders of rock-hard muscle, and a scruffy, unshaven look that spells coolness like only Statham can sport.

Statham is Arthur Bishop, a calculating, emotionless “clean-up guy” whose skills may not create an original character, but do pave the way in making a movie that does what all good bad-guys-killing-bad-guys movies do, which is make the job of being the bad guy look that much easier, not to mention cooler than hell. We know the coolest bad guys are able to strut their stuff without too much wear-and-tear on the old conscience, nor yet fear of camera surveillance or getting caught. Such is the case here.

But despite his meticulous ability to work alone and keep business business, Bishop finds himself moved to take on and mentor Steve McKenna (Ben Foster), the son of deceased comrade Harry McKenna (Donald Sutherland) with a history in the same black bag business. Bishop carries on his work while training Steve, as the two find themselves becoming a deadly duo, carrying out assignments together that put them at odds with an assortment of peculiar characters, including assassin-funding corporation leader, Dean (Tony Goldwyn). The team is threatened, however, when secrets about Steve's fathers' death begin to seep out.

The Mechanic focuses heavily on its two main characters. And while they show little depth, they are sufficient for heading up what everyone else in the movie is intended to provide—target practice for our two leads in a quest that will make for plenty of explosives and weapon-crafting, with plenty of gunfire and infiltration/escape from delightfully perilous situations. There are no cross-haired plot dynamics that make the viewer think too much. You get to relish every bit of on-screen destruction that unfolds before your eyes with trails of fire.

The movie follows the same pattern as many of the more mundane action shoot 'em ups: Bad guy gets assignment. Bad guy decides against assignment, switches sides, and finds himself making enemies of former business partners and allies. This leads to bad guy coolly killing other bad guys - with an amazing amount of luck on his side - while the audience puts down a Mr. Pibb and a bucket of popcorn. It's all really entertaining in its straightforwardness.

The framework may be familiar, but the running theme adds a credibility to the whole undertaking: Revenge gets you killed, so if you're going to kill, you've got to be in the proper state of mind—know your opponent, and for Christ’s sake, keep in the right mindset. Our hero's way of managing that is to go about preparing his instruments while listening to classical piano music.

Behold, a finesseful walk through the trash, one that polishes every piece of discarded junk with high shine and a lot of pride. The shifting in and out of new jobs, the questionable stunts, the abrupt and short sex scenes, the brutal fights sequences that go the distance instead of ending in quick knock-outs, and very the few words from Steve in his semi-disturbing portrayal of a troubled man in grief, is simply satisfying. We need very little sophistication to appreciate what is offered here in abundance.