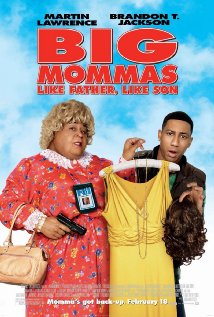 For the third addition to the Big Momma series, Martin Lawrence returns as “Malcolm Turner” with his stepson, “Trent” (Brandon T. Jackson).

Wanting to take his hip-hop career to the road instead of going to college, Trent approaches his step-dad to sign the necessary paperwork for a record deal. Dad refuses, which leads Trent to begin the mission of making dad miserable to coerce him into compliance. The plan goes awry when Trent sees an FBI takedown gone wrong and becomes witness to a murder.

Becoming the target of a wanted crime lord named “Chirkoff” (Tony Curran), Malcolm gets the idea to hide out in a girl’s school called the Georgia Girl’s School for the Arts. Keeping a watchful eye on his step-son (whose only non-survival-based reason to tolerate being hidden as a girl is the hot girls), Big Momma takes a job as a house mother, laboring and no doubt sweating daily underneath layers of padding, clothing, muumuus, and very realistic fat suits that look real even in the nude (oddly enough).

So Malcolm takes the conveniently available house mom position where most of the film’s “action” happens while “laying low.” Laying low is in quotes because “low” in the film doesn’t really mean “low” at all. It means dancing on tables, throwing down rap/hip-hop rhymes, and laying down the law Louisiana grandmother-style to every attitude-y chick in the place. These two make a pretty damn big impact for two supposedly trying to hide.

As a house mother, Malcolm meets “Kurtis Kool” (Faizon Love), a maintenance man and past affiliate of Run DMC and LL Cool J. Momma puts up with his “fishing” for her big booty while he fishes around for information on the possible whereabouts of the flashdrive—this is as Trent occupies his time in secret girl fraternities with pajamas and “sharing” and dancing, and the things we ordinary guys would beg to have happen to us.

The director of Big Momma’s House 2 (2006) brings us Big Mommas: Like Father, Like Son, a plot-hole-ridden piece of silliness that has no more to sport than a comedian dressed up as a mouthy, obese black woman. But if you enjoy Martin Lawrence humor, chances are you’ll be able to overlook the sheer ridiculousness and appreciate maybe a few portions of this plot that – were it to be taken seriously – would make us ask a few questions, like: How did Trent know where his step-father was holding this uncover FBI operation?

Does Malcolm regularly share details of classified FBI takedowns with his 17-year-old stepson? When did he find the time to do it? But if he did share the information, how could he blame him for showing up? No explanation is needed because there isn’t one. The movie just needed an excuse that could offer support for the whole dress-up scheme to take place.

There are other plot-holes, like if Malcolm knew where this flashdrive with incriminating evidence against Chirkoff was, why not just go find it on official business and leave the dress-up to the kids and drama-queen girly-girls? Why not use the evidence in the first place and avoid the whole hidden mic/sting operation that got his clueless partner killed? No answers available, which again means we can’t view this one with an even remotely serious mindset.

So, we change our focus from looking for a good movie to one that props up mindless fun for a few hours and a couple of genuinely funny lines with Lawrence doing what he does best—dress up and act eccentrically goofy. But Lawrence, one of the least funny of the super-star comedians, offers us a type of humor that has a hard time taking root in the soil of general audiences. Who really finds drag humor that funny? Does anyone you know fall out laughing over it?

And that everyone is stupid enough to fall for these obviously not real, huge, fat women – one of them with beastly muscular forearms who can’t get his chick voice right – should be considered knee-slapping all by itself, but it’s more stupid than funny.

The cliquish social environment at the girl’s school presents a challenge to be overcome by a young, rapping Trent who can win over the most hostile of crowds with group-song-inspiring raps that throw cafeterias-full of previously rude girls into “soul sista” dance and sing-alongs.

Malcolm does a much better job at reminding himself he’s in disguise as a woman, but Trent has a harder time. How either of them can keep up appearances in those hot, hard-to-put-on suits when so many other options existed as ways to hide is amazing, almost as amazing as a grown man coming up with such a juvenile idea in the first place. But Lawrence spends a lot more time as Big Momma than as plain old Malcolm even after the gig is up.

And who knew that FBI agents were patient and determined appliers of makeup and tedious disguises that take literally hours to put on? Not I.

The plot may only exist to show off Big Momma and his/her great niece/rapper, but it doesn’t overly feel like it. The long and short of it is that if you like Martin Lawrence, you might almost be motivated to give a passing grade to this slaphappy presentation of playing Motownopoly, readjusting padding, and avoiding getting boners in dressing rooms with real girls.

All of the Big Momma comedies have received failing grades on Rotten Tomatoes, but this film was in some ways better than the other three in the series. Sure, the whole arrangement is illogical and dumb, but we can’t expect too much, not here.