For Those who Dress and Marry Off Their Dogs

February 04, 2011
Movie Review: Beverly Hills Chihuahua 2 (2011)
Summary: A group of dogs band together to save Sam's parents' house and to stop a robbery.
Spoilers: none 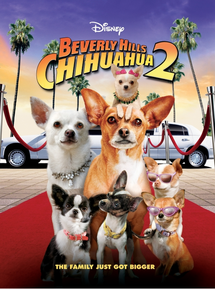 Chloe and Papi, the same two lovable chihuahuas from Beverly Hills Chihuahua (2008), are back again, this time with a large enough family to unintentionally validate those funny Mexican stereotypes. The litter reunites with their German Shepherd lookout buddy, Delgado (Andy Garcia), to save Sam's (Marcus Coloma) parents' house from going back to the bank while still finding time to stop a robbery.

It's hard to think that so much energy was put into a crappy direct-to-DVD project like this one just for the sake of a movie that absolutely depends on lines like: "You may lick the bride!" In fact, put any K-9 pun-based quip or phrase together and you have one of the staples with which a movie like Beverly Hills Chihuahua II is supported: "Your conduct is off leash." So easy to get material for the script. So easy. But clearly, their are big enough animal lovers to justify this thoughtless effort--that or we're just getting another crappy talking animal movie. Still, young enough audiences won't know the difference.

In the second edition, we have nearly the same star power as in the original film, minus Drew Barrymore as the voice of Chloe (replaced by Odette Yustman) and minus Jamie Lee Curtis as "Aunt Viv" (replaced by Susan Blakely). But that shouldn't hurt too bad, not with George Lopez back as the more than enthusiastic voice behind "Papi," the stereotypically Mexican chihuahua.

Crossing an audience of young children who will be fond of the animals with the dog enthusiast crowd should be a safe bet, ensuring that the film will be well received. You have two classes of audience who may genuinely like this K-9-crazy sequel, which is - as far as direct-to-DVD sequels go - not a bad addition in terms of the way it reunites the characters and provides an engaging story. For when we consider that this film is almost laughably inaccurate even with its dog history facts, we are still no worse off. It is lazily produced and researched. Even the credits are incomplete, and the trailers are poorly made and shotty.

But just like the last one, the "Taco Bell dog" antics and a story almost void of plot-mindful intelligence demands that this one be saved from the movie graveyard only by its cuteness. This time, we have dog shows to go with an increase in the number of talking dogs.

The plot has more holes than a deli-fresh block of swiss cheese, and even the singing in the credits is bad, but I'll be damned if a solid case can't be made that a movie with this many dogs can fail to qualify as adorable, despite it all.