Doesn’t Really Try to be Epic 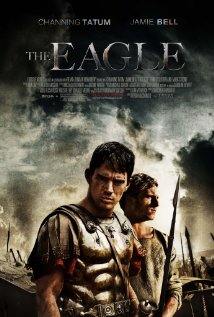 The Eagle, starring Channing Tatum, Donald Sutherland, and Jamie Bell, is a fictionalized story of a Roman soldier and commander named Marcus Flavius Aquila (Tatum) who travels to Scotland to retrieve the golden symbol of the eagle that was confiscated in battle between the soldiers of the ninth battalion and the Brits.

The film is an adaptation of a 1954 novel entitled “The Eagle of the Ninth” by Rosemary Sutcliff. Aquila is the son of “Flavius Aquila” (Aladár Laklóth) who is rumored to have fled in battle and lost the prized eagle during a failed attempt at conquering northward. His son, proud of father since his childhood, remembers and cherishes a small engraving of an eagle he wears around his neck. Marcus defends with vigor the name of his father when he hears it mocked or taken lightly. His most loyal friend and advisor is “Uncle Aquila” (Donald Sutherland).

We are summarily informed in the narrative, which begins in 120 CE, of the un-heard-from battalion and the years following where we are introduced to a young Aquila taking command of an undesirable northern patrol. Burning inside to find out what happened to the lost eagle (the pristine symbol of Rome’s victory), the young commander separates himself in a distinguished command, driven by his own gunning passions and keen instincts.

Aquila meets and saves the life of a slave named “Esca” (Jamie Bell) who, in appreciation, pledges an oath to serve him. Together, they find themselves at “the end of the world,” with Aquila taking Esca on what is considered by the senators to be a suicide mission.

These pre-Christian Roman times when animals and vegetation gods were adored in place of a crucified god-man are well created. The film’s attention to detail is admirable. It thankfully avoids the now-common tendency to overdo make-up or attire, and instead garnishes the soldiers and peasants alike in a bland brown, with grooming that befits the times.

The relaxed dialog that does not at all count on body language to assist with communication is perhaps the film’s biggest setback, and at places, is horribly obtuse. The lack of sagacity behind the performances (including Tatum’s) is only noticeable when seen for what could have been accomplished in a story that had, quite honestly, loads of potential.

The script, however, takes nothing seriously and doesn’t seem to want to be anything beyond a facile story told with the straightforwardness of a kid’s movie. The repetitive flashbacks of Aquila’s father go with his son's obsession to redeem the family name and expand the borders of Rome, but the audience is never brought to receive them with any real emotional weight.

Aquila, like each and every high-ranking Roman authority he answers to, is an imperialist—in fact and in heart. Esca, a despiser of all things Roman and a survivor of a family that was slaughtered in a Roman invasion years earlier, is only bound to Aquila by his bond. Aquila’s advisors feel that given the chance, Esca will betray him, but Aquila’s faith in him overrides the justifiable sense of worry.

What can be frustrating is that there are no subtitles to accompany the sometimes-lengthy non-English speech between the Romans and savages, but this (no doubt unintentionally) serves as a suspense-builder in perilously tight situations at the film’s end where Esca’s loyalty to Aquila is tested.

The Eagle is no remarkable achievement. The acting, like the fighting, is piecemeal, but par for the course in this bare-bones story that is far less epic than Gladiator, but intense and dynamic enough to be the perfect lazy movie for an afternoon of cable channel viewing. Strewn throughout are scenes of bloody battles, crippling injuries, followed by anesthesia-free surgeries—all of them things we can appreciate as points of interest in the time period.

But not to be spat upon, there is something just about worth seeing here. The movie’s applicable analysis of what it means to trust, to possess loyalty, and to value personhood in spite of blind, nationalistic motives gives The Eagle all the marks of a would-be legendary tale – including superb pacing – in the package of a straight-up, old-fashioned story that simply is what it is.